20 Sexy Movies to Stream on Netflix and Hulu Right Now

Make date night even hotter with with these sensual, streamable flicks. 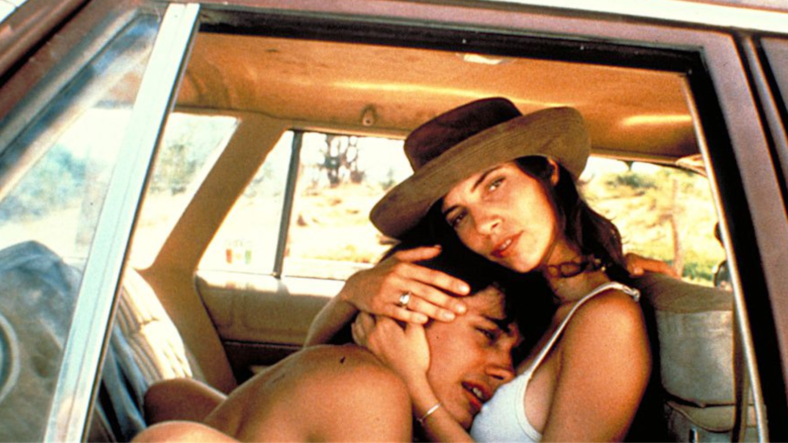 But prepare to indulge in 20 sexy movies to stream on Netflix and Hulu right now — with Rotten Tomatoes ratings and descriptions — because there’s nothing like a legit sexy (and decidedly non-pornographic) flick to take Netflix and Chill to the next level.

Blue is the Warmest Color

This acclaimed French indie “centers on a 15-year-old girl named Adèle who is climbing to adulthood and dreams of experiencing her first love. A handsome male classmate falls for her hard, but an unsettling erotic reverie upsets the romance before it begins. Adèle imagines that the mysterious, blue-haired girl she encountered in the street slips into her bed and possesses her with an overwhelming pleasure. That blue-haired girl is a confident older art student named Emma (Seydoux), who will soon enter Adèle’s life for real, making way for an intense and complicated love story that spans a decade and is touchingly universal in its depiction.”

“Alfonso Cuarón directed and co-wrote this sexy art-house hit from Mexico. The funny and moving coming-of-age story centers on two immature teens who get an education in love when they take a sexy road trip with a liberated, unhappily married woman (Maribel Verdu).”

“Sadomasochism provides the backdrop for a very unusual employer/employee relationship in this very offbeat romantic drama from filmmaker Steven Shainberg.”

Sleeping with Other People

“Jason Sudeikis and Alison Brie star as two romantic failures whose years of serial infidelity and self-sabotage have led them to swear that their relationship will remain strictly platonic. But can love still bloom while you’re sleeping with other people?”

From Dusk till Dawn

“Tarantino stars with George Clooney as a pair of bad-to-the-bone brothers named Seth and Richie Gecko. After a string of robberies that left a river of blood in the Geckos’ wake, the sadistic siblings head to Mexico to live the good life.”

“Equipped with platinum blond hair and a winning smile, NYC college girl Leah (Homeland’s Morgan Saylor) seeks out pleasure in any form. Between getting high with her roommate and snorting lines with her boss, Leah falls for Blue (Brian Marc), a young man dealing drugs on her corner. Within days, the two are selling dime bags to her boss (Justin Bartha) and his downtown friends and living the high life. Summer love crashes to a halt when Blue is arrested and Leah is left with a serious bag of his coke. Enlisting the help of an overpriced lawyer (Chris Noth), Leah finds herself deep in debt as she crosses all boundaries to get Blue back.”

“Blue Valentine tells the story of David and Cindy, a couple who have been together for several years but who are at an impasse in their relationship. While Cindy has blossomed into a woman with opportunities and options, David is still the same person he was when they met, and he is unable to accept either Cindy’s growth or his lack of it.”

“Michael Douglas stars with red-hot Sharon Stone in this groundbreaking and controversial film that redefined the genre of the sexy thriller.”

“Therese (Rooney Mara), a young department-store clerk in 1950s Manhattan, meets Carol (Cate Blanchett), a beautiful older woman stuck in a depressing marriage of convenience. As their bond deepens and they become romantically involved, Carol finds the strength to leave her husband (Kyle Chandler). Unfortunately, her spouse starts to raise questions about her fitness as a mother when he realizes that Carol’s relationships with her best friend Abby (Sarah Paulson) and Therese are more than just friendships.”

“A voluptuous woman of unknown origin (Scarlett Johansson) combs the highways in search of isolated or forsaken men, luring a succession of lost souls into an otherworldly lair. They are seduced, stripped of their humanity, and never heard from again.”

“Gerald Burlingame (Bruce Greenwood) and his wife Jessie (Carla Gugino) attempt to rekindle the flames of their marriage with a retreat to their remote lake house. But when a dangerous sex game accidentally kills Gerald and leaves Jessie handcuffed to the bed, the latter is forced to overcome panic and hallucinations if she wants to escape.”

“Caleb Smith (Domhnall Gleeson), a programmer at an internet-search giant, wins a competition to spend a week at the private mountain estate of the company’s brilliant and reclusive CEO, Nathan Bateman (Oscar Isaac). Upon his arrival, Caleb learns that Nathan has chosen him to be the human component in a Turing Test-charging him with evaluating the capabilities, and ultimately the consciousness, of Nathan’s latest experiment in artificial intelligence. That experiment is Ava (Alicia Vikander), a breathtaking A.I. whose emotional intelligence proves more sophisticated–and more deceptive–than the two men could have imagined.”

“In a superhero origin tale unlike any other, the film is the incredible true story of what inspired Harvard psychologist Dr. William Moulton Marston to create the iconic Wonder Woman character in the 1940’s. While Marston’s feminist superhero was criticized by censors for her ‘sexual perversity’, he was keeping a secret that could have destroyed him.”

“A look at the amateur-porn industry profiles a young adult actress who discovers its downsides.”

Perfect Sense “stars Eva Green and Ewan McGregor as witnesses to the end of the world– strangers who form a desperate romantic connection in the face of an apocalyptic epidemic of sensory loss.”

“After losing her virginity, 17-year-old budding beauty Isabelle (Marine Vacth) takes up a secret life as a call girl, meeting her older gentlemen clients for sleazy hotel room trysts. Throughout, she remains curiously aloof, showing little interest in the encounters themselves or the money she makes, while Ozon slyly refrains from offering easy answers.”

Natalie Dorman co-wrote and stars in this thriller about a blind pianist who fears for her life after hearing the suspicious murder of her neighbor (Emily Ratajkowski).

“A Teacher explores the unraveling of a young high school teacher, Diana (Lindsay Burdge), after she begins an affair with one of her teenage students, Eric (Will Brittain). What starts as a seemingly innocent fling becomes increasingly complex and dangerous as the beautiful and confident Diana gets fully consumed by her emotions, crossing boundaries and acting out in progressively startling ways.”