The event will also feature performances by Snoop Dogg, Diplo, Carnage, and Shaq as DJ Diesel. 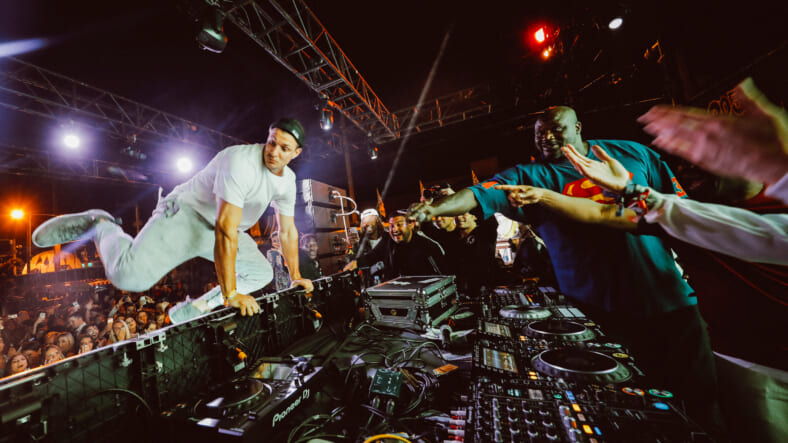 Shaquille O’Neal and Rob Gronkowski may come from very different sports and even different generations, but together it seems like the pair make for one hell of a fun circus-like atmosphere wherever they go. Now, the two actual giants are combining their party powers for a good cause.

Shaq and Gronk will face off on June 27th—it will be Shaq’s Fun House vs. Gronk Beach. They’ll be throwing what they’ve termed a “virtual party” full of games and music and all of it for a good cause: social justice.

Shaq tells Maxim, “Nothing unites people like sports and music, and we all know during times like these it’s important to come together.”

The NBA superstar says he called his “brother from another mother, the legendary Rob Gronkowski, and together we assembled a party with a purpose featuring some of my good friends like Diplo, Steve Aoki, Snoop Dogg, DaBaby and more.”

“Ever since Shaq and I had our dance battle in Miami a few years back,” says Gronk, “we have become good friends, it’s pretty crazy because I have looked up to Shaq since I was a little kid and now he’s like a big brother to me.”

Gronk continues, “We put our heads together and came up with this concept that will bring our festival brands to life through a free livestream for fans to watch from home.”

Shaq and Gronk will compete in various challenges—and neither has lost any competitive edge. “I’m gonna take Gronk down in Jousting,” Shaq tells us.

He goes on to say they will also “have a Lip Sync Battle, an interactive game of HORSE with our partners YAPPA [the official livestreaming platform for the event], where fans can tell us what kind of shots to take, an eating contest, and much more planned.”

Rob Gronkowski is competing for the NAACP. Shaquille O’Neal is competing for Boys & Girls Clubs of America. For each individual livestream viewer up to 1.25 million, meal delivery service DoorDash has partnered with Feeding America to donate one meal per viewer.

Comedian JB Smoove will play party host along with sports journalist and broadcaster Taylor Rooks. There will be interviews as well as musical performances by Snoop Dogg, DaBaby, Steve Aoki, Diplo, and Carnage.

Shaquille O’Neal will also get in on the festivities as DJ Diesel.

Fans who want a chance at winning a Zoom meet and greet with the stars of the show—before the livestream—can enter “The General Admission” sweepstakes at thegeneral.com/shaqvsgronk.

Medium Rare and ABG Entertainment are producing this one-of-a-kind event and Shaq and Gronk will get the party started at 8 p.m. ET on June 27, 2020. That’s when viewers can check out the livestream on Tik Tok, or simulcasts on Facebook, Twitch, YouTube, and Twitter—or just watch the fun for free on ShaqVsGronk.com.