All he needs are some tasty waves, a cool buzz, and he’s fine. 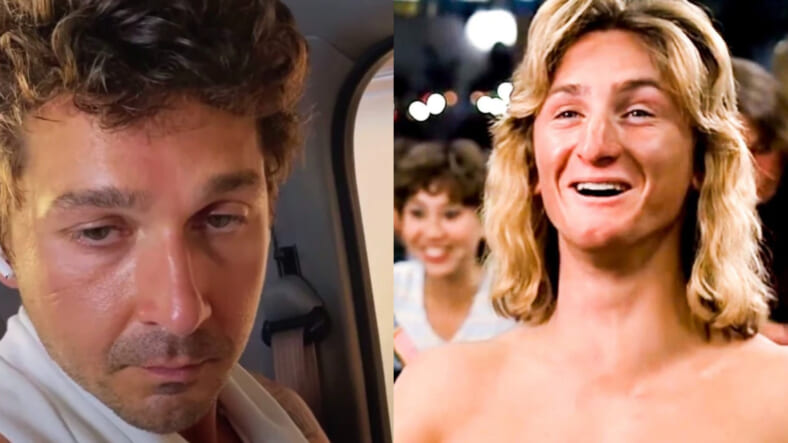 The entertainment world has adapted to the coronavirus pandemic by using a basic rehearsal tool for shows in production as an easy way to give their audience an oddly intimate form of entertainment: The table read.

Shia LaBeouf did not have to go as hard as he did as Jeff Spicoli in the #FastTimesLive table read. But boy did his commitment make him a total star of the show. He even had the original Spicoli Sean Penn in fits of laughter, as well as Brad Pitt and Matthew McConaughey. pic.twitter.com/yvExeHDaDk

Thanks to Shia LaBeouf it may be the best example so far, too, because he absolutely stole the show as Spicoli, to the point where even his co-stars—especially original Spicoli Sean Penn—found it impossible to keep a straight face.

The Fast Times virtual table read was to raise money for CORE—a Community Organized Relief Effort aimed at fighting the spread of COVID-19—and the REFORM Alliance, which aims “to dramatically reduce the number of people who are unjustly under the control of the criminal justice system.”

I could write 10,000 words on this video. Jennifer Aniston is playing it so fucking cool but Brad Pitt is clearly embarrassed. I LOVE MY DIVORCED PARENTS.pic.twitter.com/C6RP8D68Xr

Something like this is pretty much guaranteed to have some viral moments and the infamously steamy scene in which Brad Hamilton (here played by Pitt, originally played by Judge Reinhold), uh, watches Linda Barrett (Phoebe Cates in the movie, read here by Jennifer Aniston) as she exits a pool in a red bikini went viral right away, as the two once dated. That Morgan Freeman was reading the scene direction helped.

Really, though, it ended up being Shia LaBeouf’s show because his Spicoli was comedy genius. You can watch the whole thing in the Youtube video embedded above. Check out some tweeted clips and commentary on LaBeouf’s turn as the iconic stoner below.

Love for Shia Labeouf increasing by the second #FastTimesLive pic.twitter.com/WaB6J1D0Qy

Is Shia LaBeouf wasted or the greatest method actor of our generation? pic.twitter.com/mRMkRu5h7i

When I tell you Shia LaBeouf was DEDICATED to this role. #FastTimesLive

Morgan Freeman narrating Shia LaBeouf being high is out of this world pic.twitter.com/dSzZgI3XrY

Damn, remake the actual movie with Shia in the role. Sean Penn was 22 when he played the high school stoner and LaBeouf is 34—but actors being way too old for the character they play never stopped Hollywood before.