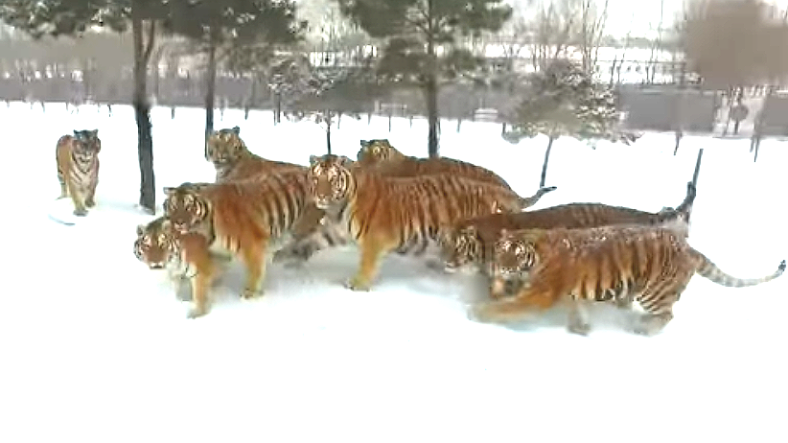 Watching this viral video of Siberian tigers taking down a hapless little drone then trying to eat it is thrilling until you realize, ‘this is what it might look like to get stalked by a freaking pack of tigers.’ That’s some pretty decent nightmare fuel.

The footage comes from China’s CCTV, and the unfortunate drone tracked and plucked from the sky by these hefty, rare super predators was brought in by reporters just trying to get some cool footage of them frolicking in the snow.

The tigers are just having fun until they see the quadcopter, then the hunt is on. Eventually one of the 700-pound giant cats gets enough height to snag the machine and it was done.

These tigers live in a park in China’s Heilongjiang Province and in the interest of full disclosure, we must admit parks like this one have shitty reputations regarding treatment of the big beasts.

Feeding them drones doesn’t even cover it—there have been allegations that parks like this participate in trading tiger bones for strange quack medicines such as “tiger bone wine.”

We hope the magnificent creatures seen in this video will never face such an awful fate. If they do, maybe the keeper who comes to find his next source of tiger bone wine should meet the same end as that unfortunate drone.