Just in time for the World Series. 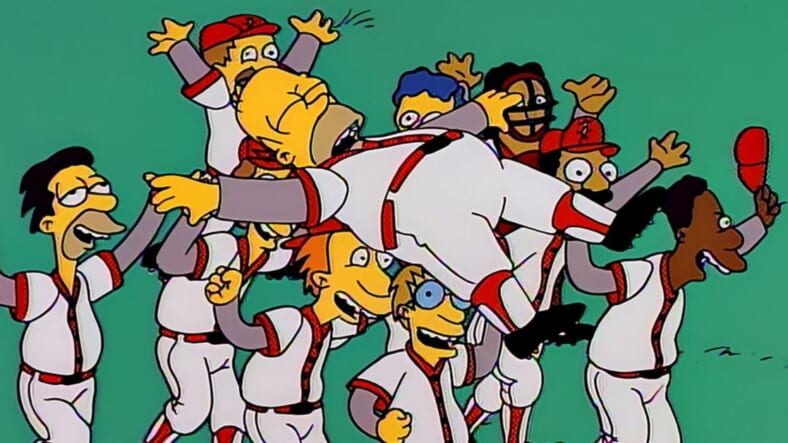 The most beloved episode of The Simpsons, among baseball fanatics at least, will be revisited this Sunday in a new mockumentary from Morgan Spurlock (Super Size Me).

Airing on FOX, Springfield of Dreams: The Legend of Homer Simpson looks back on the events of 1992’s iconic “Homer at the Bat” episode. It will feature “interviews” with Homer Simpson as well as baseball legends like Ken Griffey, Jr., Roger Clemens, Wade Boggs, Don Mattingly and more.

The episode followed the Springfield Nuclear Power Plant softball team as it qualified for championships. To ensure victory, Mr. Burns hires nine professional MLB players including Hall of Famers Wade Boggs, Ken Griffey Jr. and Ozzie Smith, who played themselves in the episode, but it’s Homer’s magical bat and oversized head that carry the team.

VICE opined on the importance of the episode, which it called the best of the series.

“Homer at the Bat” was the episode in which The Simpsons took the leap from off-beat, yet (reasonably) naturalistic, depiction of blue-collar America, to a show with boundless realms of possibilities. For me, it’s the episode where The Simpsons grasped the potential of its animated universe: the synthesis of awareness, absurdism, culture, and unreality that would turn the show into the greatest post-modern critique of the 20th century in any medium.

In honor of the 25th anniversary of the episode, Homer Simpson was inducted into the Baseball Hall of Fame earlier this year.

Springfield of Dreams will even more greatly play off the episode’s sports legacy. Entertainment Weekly has the details:

The hourlong special, which satirizes Ken Burns’ seminal documentary miniseries Baseball, will pay tribute to the episode while offering up interviews from eight of the baseball stars who appeared as ringers in the episode, as well as Yankees All-Star Aaron Judge, Nick Offerman, Russell Brand, George Will, Tim Gunn, and Dr. Oz, not to mention sportscasters Bob Costas, Joe Buck, Bob Uecker, and Charissa Thompson. In addition, the documentary includes “interviews” with Homer, Moe, Chief Wiggum, Apu, and Comic Book Guy.

Springfield of Dreams: The Legend of Homer Simpson will air on FOX Sunday, October 22.