“I think Ted’s the one who could use a pacifier in his mouth.” 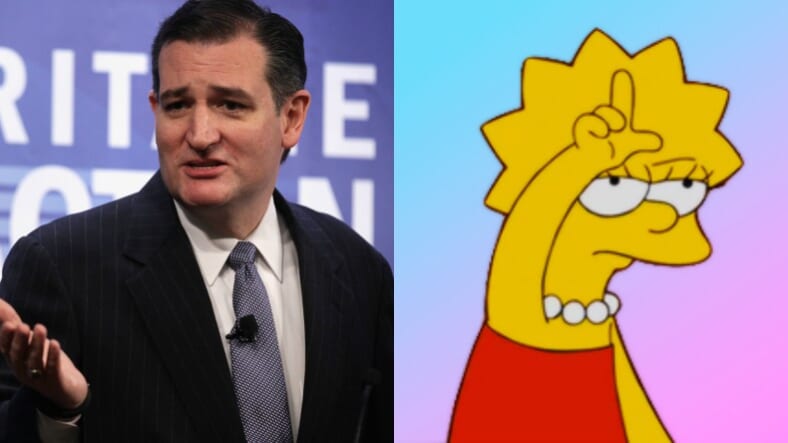 A head writer for The Simpsons skewered Ted Cruz for using the show to make a point about gun control.

During a recent interview, The Federalist’s Ben Domenech asked the senator for his thoughts on Lisa’s exchange with a gun-toting Homer from the classic episode, “The Cartridge Family.”

In it, Lisa calls the right to bear arms granted by the Second Amendment a “remnant from revolutionary days,” a point with which her father disagrees.

Cruz awkwardly assigned each member of the animated family a political party during his interview.

“I think the Democrats are the party of Lisa Simpson and Republicans are happily the party of Homer and Bart and Maggie and Marge,” Cruz said.

Veteran writer Al Jean, who has served as one of the sitcom’s showrunners since 2001, called the Texas republican out for making the strange analogy in a series of tweets.

.@TheSimpsons Ted Cruz says Maggie Simpson would vote for him.
I think Ted's the one who could use a pacifier in his mouth.

“I think Ted’s the one who could use a pacifier in his mouth,” Jean wrote. “The way things are going even Mr. Burns is thinking of becoming a Democrat.”

.@TheSimpsons The way things are going even Mr. Burns is thinking of becoming a Democrat.

Damn. Need from ice for that burn, Senator Cruz?