Bassist D’Arcy Wretzky is the only missing Pumpkin. 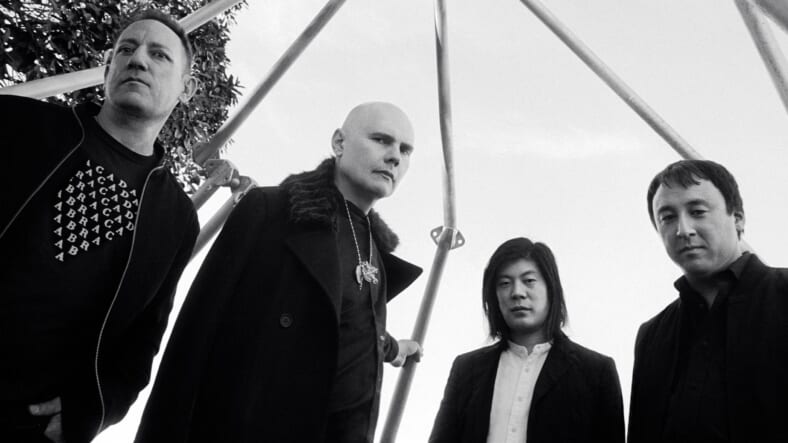 Three of the original Smashing Pumpkins are celebrating the band’s 30th anniversary with their first tour together in nearly 20 years.

Founding members Billy Corgan, Jimmy Chamberlin, and James Iha will play 36 dates across North America on the “Shiny And Oh So Bright Tour” this summer.

“Some 30 years ago, as The Smashing Pumpkins, James Iha and I began a musical journey in the cramped rear bedroom of my Father’s house,” Corgan said in a press release.

“It’s magic to me that we’re able to coalesce once more around the incredible Jimmy Chamberlin, to celebrate those songs we’ve made together.”

The Pumpkins’ fourth original member, bassist D’Arcy Wretzky, will not join her fellow band members, seemingly because of recent turmoil between her and Corgan.

Rolling Stone has further details regarding that drama:

Wretzky gave an interview with the music site Blast Echo in which she blamed Corgan for excluding her from the reunion (the full Smashing Pumpkins classic lineup hasn’t performed together since April 1999).
The interview prompted the Smashing Pumpkins to release a statement before officially announcing a reunion in which they claimed they’d invited Wretzky to partake in the reunion in various ways. “For despite reports, Ms. Wretzky has repeatedly been invited out to play with the group, participate in demo sessions, or at the very least, meet face-to-face, and in each and every instance she always deferred.”In a follow-up interview with Alternative Nation, Wretzky claimed that Corgan had never intended to hire her full-time and had instead enlisted Jack Bates, the son of New Order’s Peter Hook, to play bass.

Below, see the full list of Shiny And Oh So Bright Tour dates.