“Last night I switched her birth control with Tic-Tacs.” 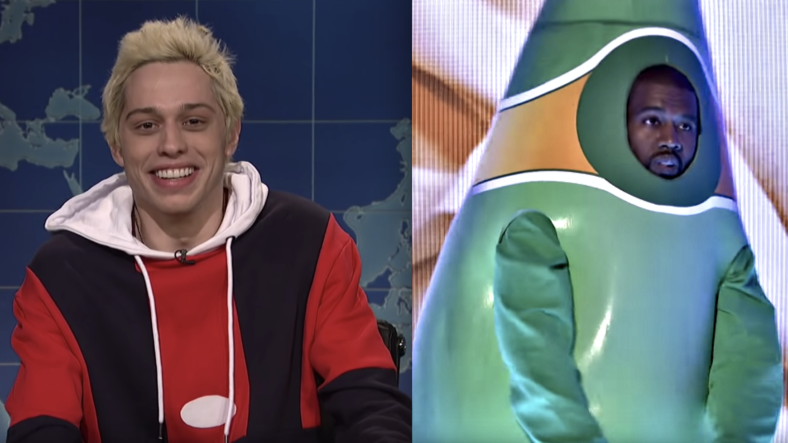 The premiere of the 44th season of Saturday Night Live with host Adam Driver and musical guest Kanye West was damn funny, though not always on purpose. There was the usual political satire—Matt Damon in the cold open as an enraged Brett Kavanaugh—but there were jokes enough about cast member Pete Davidson’s relationship with superstar Ariana Grande to fill a standalone episode.

Also: Kanye West apparently auditioning to be the next mascot for Perrier.

Damon’s take on the controversial Supreme Court nominee was some pretty searing political satire, but even SNL’s best sketches about contemporary politics can seem dated by the following day. The same could be said of jokes about Davidson and his insanely famous pop star fiancee, were it not for Davidson’s knack for deadpan delivery; that’s the kind of funny that stays funny. His segment on Weekend Update (see above) is exhibit A.

He did step in it with one joke, and Twitter was pissed. Well, more pissed than usual.

The joke: “Last night I switched her birth control with Tic-Tacs…I believe in us and all, but I just want to make sure that she can’t go anywhere.”

Just a few tweets demonstrate how well that went over:

Generally I thought Pete Davidson was funny, but until birth control sabotage stops being a common form of abuse and a way abusers trap women in dangergous relationships, I'm not going to laugh at that joke #SNLPremiere

#SNLPremiere Okay, we know that Pete Davidson and Ariana Grande are a couple, I am tired and this is creepy cause he actually said he switched her birth control,put Tic-tacs to ensure that she doesn't leave, WTAF!?

Pete, man….I was with you until that joke about birth control. Not great my guy #SNLPremiere

It was just a joke, but his girlfriend has 58 million Twitter followers. He could have given a small wave and said “hi, babe” and been hammered by a million angry tweets.

Then there was Kanye. Or as he prefers now, Ye.

Anyone who missed Kanye West’s first performance should watch it above. No, seriously. No need to like the song. Turn down the volume, and just imagine it’s a hallucination.

The easy take on this performance is that Kanye West has lost his damn mind. But the tweet at the top of his Twitter feed Sunday morning may show that he was in on the joke.

At the end of the show, Mr. Kardashian launched into another number when the cast would normally be hugging and schmoozing as the playoff music rolled. It was cut for time, and that was probably for the best since it was political, and not the kind of politics that go over well on Saturday Night Live at all. Chris Rock caught the scene in an Instagram story, which others then ripped and tweeted.

The dark horse for best sketch of the night starred Adam Driver and Pete Davidson, and it really was demented and hilarious. On Career Day at his school, Mordecai’s (Pete Davidson) ancient father, Abraham H. Parnassus (Driver), talks about his time as an oil tycoon.

Invisible under surprisingly convincing old age makeup, Driver delivers what would be an Oscar-worthy performance under any other circumstances. Davidson can barely hold it together watching Driver milk the bit for everything it’s worth as he rants about Abraham’s dead rival, H.R. Pickens: “I crushed you into the ground, and now your bones turn to oil beneath my living feet! I married your granddaughter, filled her belly with my festering seed, and sired a boy! He is my final revenge, H.R!”

All in all, Season 44 kicked off with a bang. It’ll only get weirder—and more controversial—from here on out.

On October 6, SNL will be hosted by Awkwafina with musical guest Travis Scott.