No one was off the hook. 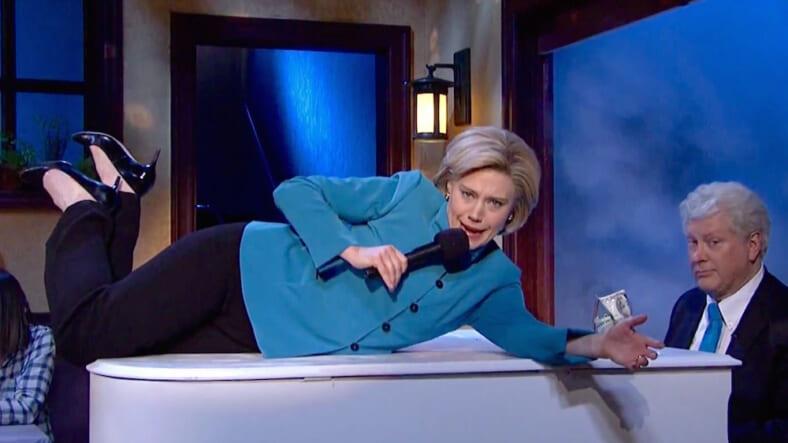 We knew SNL was going to bring it last night. Scene-stealer Melissa McCarthy stopped by for her fourth hosting gig, while Kanye West, again embroiled in controversy, served as the musical guest. While there were some of the usual ups and downs, last night mostly delivered.

Hillary Clinton serenaded young voters.Kate McKinnon really is SNL‘s new superstar. In this cold open, she married her spot-on Hillary impersonation with her knack for theatricality. Though SNL has been accused of playing favorites, this skit poked fun at Hillary’s biggest hurdle with young, brunching voters–likeability (or lack thereof). Watch McKinnon’s Hillary bemoan her campaign woes in this soulful rendition of Bonnie Raitt’s “I Can’t Make You Love Me.”

Kyle Mooney challenged Kanye West to a rap battle.If Kanye West is going to declare himself the greatest rapper alive, he’s going to face formidable opponents who threaten to steal his crown. Luckily for Kanye, SNL‘s Kyle Mooney is not one of them. In this mockumentary-style skit, Mooney detailed his life-long ambitions to become a world-famous rapper. Watch the moment he sparred with the self-proclaimed world’s greatest rapper.

SNL got political in this Beyoncé skit. Until recently, SNL was mired in racial controversies of its own, with few comics of color in its cast lineup. Now, the show is making the most of a more diverse cast, this time taking on the uproar over Beyoncé’s boldly political “Formation.” Watch “the day Beyoncé turned black.”

Pete Davidson watched a sex scene with his parents. Things were largely topical last night, so this sketch was a breath of fresh air. In the skit, youngest cast member Pete Davidson sat down with his wholesome-looking parents to watch Terminator when an unforeseen sex scene popped up. This scenario has been played out a million times over in comedy, but McCarthy playing a straight-laced mother makes it worth the watch.