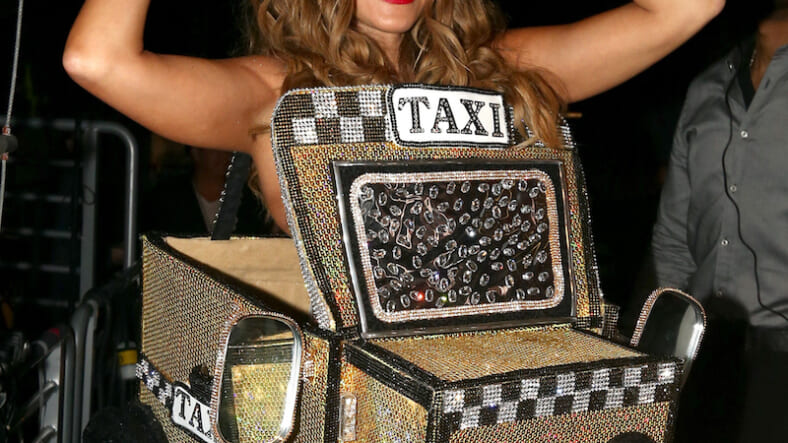 Last night’s Grammys were a rocky ride from beginning to end. If you were somehow watching the awards show for the first time ever last night, you may have thought that it was a student-run production held in the basement of a community college. But nay, this was actually the shows’ 58th year, and probably one of its worst, if you were to judge solely by the night’s performances and overall technical quality. (Poor Adele.)

Closing out what felt like a 17-hour telecast, Pitbull took the stage to perform “El Taxi” and “Bad Man,” accompanied by Travis Barker, Joe Perry, Robin Thicke, and grown woman/famous actress Sofia Vergara who was dressed as a sexual car. Wait, let me rephrase that: she was dressed like a sexual taxi cab. Have a look for yourself below:

Reactions to #SexyTaxi were passionate:

Sofia Vergara is a famous actor who just walked onstage dressed as a taxi. #Grammys

I want better for Sofia Vergara. I really do. #GRAMMYs

Was that Sofia Vergara's Dancing With The Stars audition? #Grammys pic.twitter.com/mqI3Xx24XR

A full rundown of the night’s winners can be found here but at the end of it all, does anyone really win on a night where Justin Bieber tuning his guitar backstage ruins a whole Adele performance? (That’s totally what that noise was. Don’t cover for him, Adele.)