Screenwriters Reveal That ‘Solo: A Star Wars Story’ Was Inspired by ‘The Big Lebowski’ 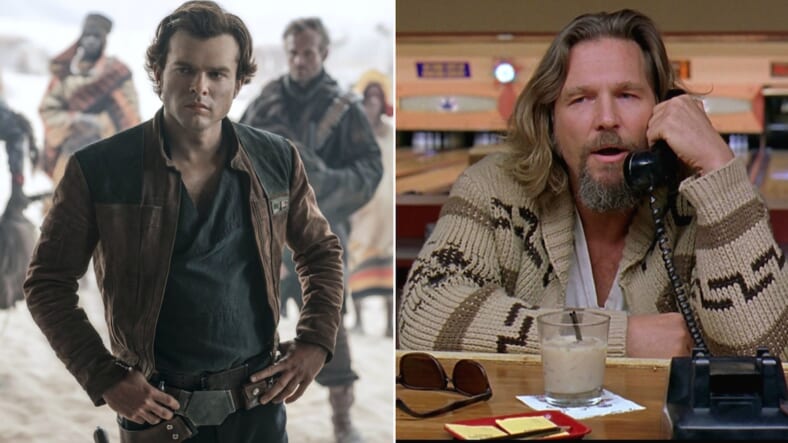 The screenwriters of Solo: A Star Wars Story have revealed the unexpected influences of their upcoming Han Solo origin movie.

Father-son writing duo Lawrence and Jon Kasdan said they were inspired by classics like Unforgiven, Heat and even The Big Lebowski.

“Larry and I are both huge Coen brothers fans, and we talk a lot about that [relationship] as a reference,” Jon Kasdan told Entertainment Weekly.

“[We were] trying to create a crime movie where our character was entering a crime world where there were already dramas in place and relationships and complications, and we have to see him negotiate a lot more rivalries than he is expecting at the beginning of the story,” he said.

“[Solo] has that flavor of a crime world that has weirdness and surprise and people stumbling into things — and other people very intentionally getting into [trouble],” he added.

“The Big Lebowski is a great example because Solo has a more off-kilter tone than you’ve ever seen in [Star Wars].”

They then explained to Entertainment Weekly that the dynamic between Han Solo, played by Alden Ehrenreich this time, and his mentor Tobias Beckett, Woody Harrelson, is not unlike that of Clint Eastwood and “The Kid” in Unforgiven and Val Kilmer and Robert De Niro in Heat.

“We talked about the relationship between Val Kilmer and Robert De Niro in Heat, where there’s a sort of older, wiser criminal, and then someone who’s learning the ropes from them. We wanted this movie to have that flavor and that swagger,” Lawrence Kasdan said.

“No one is reliable. There’s always a chance of betrayal. And, I wanted to take what is essentially a street smart, but very innocent, young man, and figure out how could we start him on the journey to being the character who comes into the cantina?”

“There’s a feeling in Unforgiven between the kid and Clint that hits the kind of [apprentice/gunslinger] relationship we were interested in,” Jon Kasdan added, before clarifying that that movie “is obviously a much darker movie than [Solo] is.”

Look our for these nods when Solo: A Star Wars Story hits theaters May 25th.