The Notorious B.I.G’s Iconic Crown Up For Grabs at Sotheby’s First Hip-Hop Auction

It was all a dream. 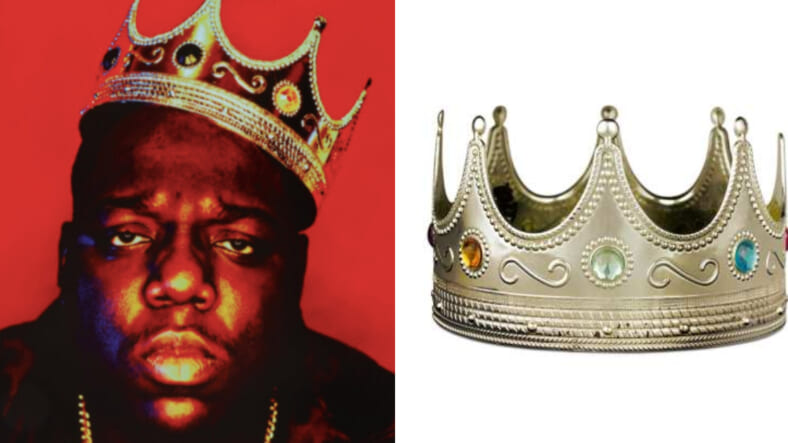 Sotheby’s is catching up with pop culture with its first-ever auction of items with symbolic and monetary value from the history of hip-hop. Offerings include love letters from a teenage Tupac Shakur and perhaps the biggest prize of all, the crown that Notorious B.I.G. wore in his iconic “King of New York” photo shoot.

This shoot was significant for a number of reasons, chief among them being it was Biggie Smalls’s (born Christopher Wallace) last known such shoot before he was killed at age 24 in March 1997.

Here’s some background from Sotheby’s:

The crown, which was recently showcased in the groundbreaking book and exhibition Contact High: A Visual History of Hip-Hop by Vikki Tobak, is on offer by the photographer Barron Claiborne, whose possession it has remained since the photoshoot. Included in the lot are three specially sized (36 x 40″) prints – all 1/1 printed and signed by Claiborne – of the iconic ‘K.O.N.Y’ photograph, the 10th anniversary K.O.N.Y. photograph, and the contact sheet (estimate $200/300,000). The interior of the crown bears the inscription “Crown from Biggie KONY Shot NYC 3-6-97” and is signed by both Biggie and Claiborne.

That’s right, the crown could go for as much as $300,000, though there’s a chance Sotheby’s is lowballing the price, given Biggie’s status as a true rap icon, in part thanks to this photo.

Photographer Barron Claiborne added in a statement that after hanging on to the crown for 23 years, he is “very excited to share this iconic piece of Hip Hop history with the public.”

“With the tragic events that unfolded just days after the photoshoot,” Claiborne continued, “this image of a crowned Notorious B.I.G. became much more than a portrait – the image transformed Biggie Smalls into an aristocratic or saint-like figure, forever immortalized as not only the King of New York but a king of Hip Hop music and one of the greatest artists of all time.”

Also on offer are 22 love letters written by Tupac Shakur as a 16-year-old student at the Baltimore School for the Arts to his sweetheart at the time, Kathy Loy. Sotheby’s has estimated those could go for between $60,000 and $80,000.

Part of the proceeds from the auction will go to the Queens Public Library Hip Hop Programs and a non-profit community organization for DJs and Music Programs called Building Beats.