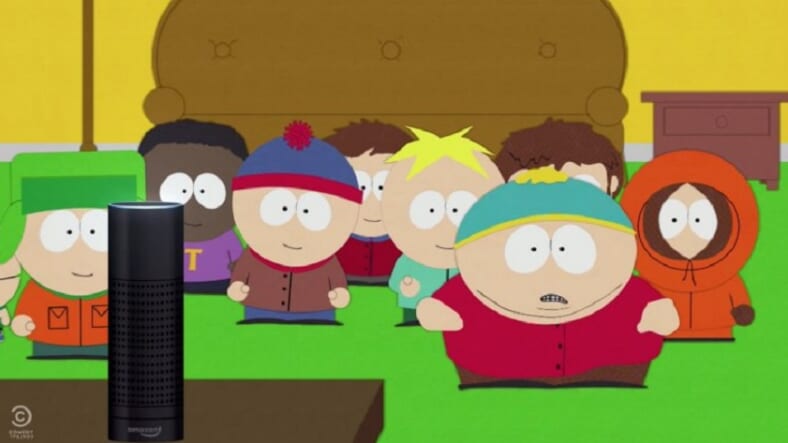 It’s hard to believe that Trey Parker and Matt Stone didn’t know exactly what they were doing with Wednesday night’s season premiere of South Park.

This episode marked the beginning of the show’s 21st season and as usual, South Park took on current issues like tiki torch-wielding white supremacists and… home digital assistants.

The latter meant lots of gags in which Cartman and other characters addressed Amazon Echo’s Alexa and Google Home as well. And that ended up being a problem for viewers who own those devices. The tweets tell the story.

This episode of South Park drove my Alexa crazy. I never knew my Alexa had such a potty mouth. pic.twitter.com/lWIHySClRd

This @SouthPark episode has set my @amazon Alexa off about 15 times so far. Had to unplug it

This fucking South Park ep has triggered my Alexa like 6 times. I now have "hairy balls" and "smelly tampons" on my Amazon shopping list.

@SouthPark nailed it tonight. In other news I have an erroneous alarm set for 7am and a set of hairy balls on my shopping list. #alexa

The above were just a tiny sample from thousands of similar complaints posted as the show aired.

South Park writers absolutely knew their lines would do this and probably had a hilarious time coming up with funny commands for the home assistants.

But the question remains: will they reimburse everyone who receives hairy balls via UPS tomorrow? How are those even packaged? Hopefully they’re marked “Fragile.”

We’ll just have to wait and see.