Get Ready For a Cache of Deleted Scenes From ‘Star Wars: The Force Awakens’

We haven’t seen everything ‘The Force Awakens’ has to offer just yet. 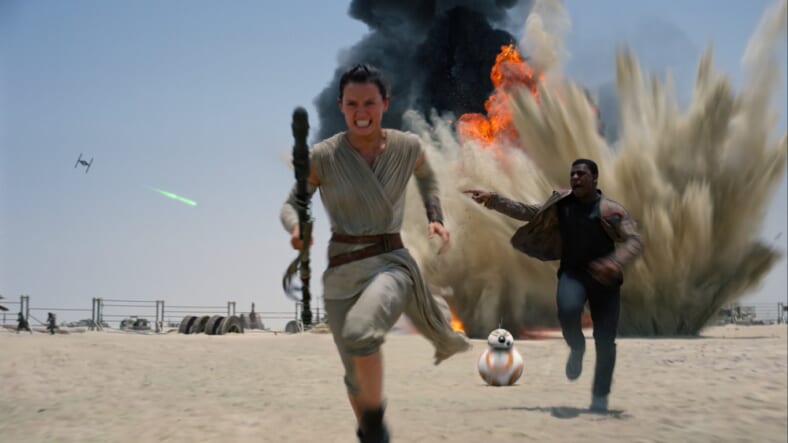 Star Wars: The Force Awakens is probably the most successful movie in the history of cinema, approaching $2 billion worldwide at the box office and close to dethroning Avatar and Titanic as the highest grossing films of all time. But even though JJ Abrams managed to craft a magical spectacle to wow theater-going audiences, we haven’t seen everything the Force Awakens has to offer just yet.In an interview with the Independent, The Force Awakens editors Mary Jo Markey and Maryann Brandon revealed that there’s a nice cache of unseen footage buried in the upcoming DVD and Blu-ray release of the movie:

“We have been talking about [the deleted scenes],” Brandon began. “But Disney has mentioned to us that – since they’re going to be on the DVD treats for viewers – that we should stop talking about them.”When pressed a little further, the Oscar-nominee said: “There aren’t a lot. There’s one with Harrison Ford, there’s one with Rey, but there aren’t a lot.“I think there are maybe seven or eight,” added Markey. “I don’t know if that’s a lot. I remember looking at the reel. Actually, I think there are seven.”

Um, seven or eight scenes is certainly a lot, especially when you consider how drastically The Force Awakens has shaped the galaxy far, far away that people have grown to love over the last four decades.  Although hey, maybe it’s just extra banter from Maz Kanata’s castle. “I honestly think that what is in the film is exactly what needs to be in the film, and what isn’t remains fun but not necessary,” Brandon told the Independent.We respectfully disagree. According to GamesRadar, one deleted scene may include an extended version of Rey’s vision at Kanata’s place — a vision that may include footage of Luke Skywalker and Darth Vader’s infamous duel from The Empire Strikes Back:

“As she peered into the distance, she saw a man in black wielding a red Lightsaber. His face was covered with a mask, molded to approximate a human face. But the mask’s eyes were dead and empty. The man’s red Lightsaber clashed against a brilliant beam of blue. A young man with blond hair raised his own Lightsaber and fought furiously against the monster in black.”

“Not necessary” my ass. I can’t wait to see what the home release has in store.h/t Uproxx