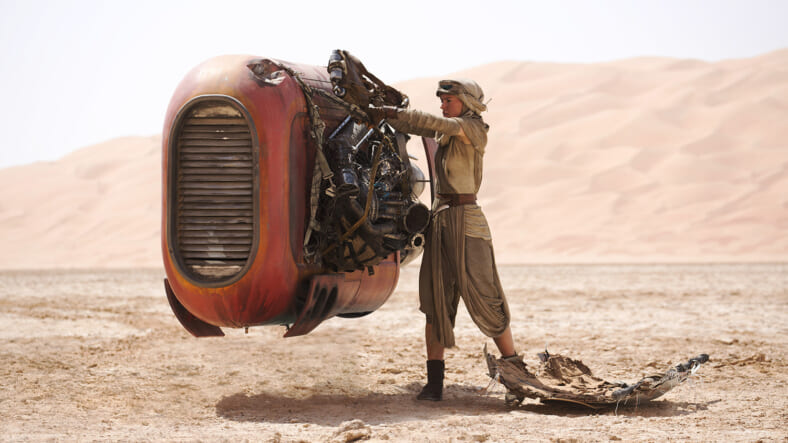 Now that we’ve spent two weeks talking nonstop about the Force Awakens we saw in theaters, it’s time to obsess about what we didn’t see.

The folks over at Slashfilm did some investigative work to reveal a number of deleted scenes and storylines that landed on the cutting room floor before The Force Awakens was finally completed. Mr Sunday Movies also created a featurette that includes some different deleted storylines, but it would be a stretch to characterize most of them as deleted scenes, because it does not appear that many of those concepts were actually filmed (unless we are confused, which is possible). But here are some of the most noteworthy narratives in the Force Awakens deleted alternate universe, according to some people:Rey Didn’t Know Who Luke Skywalker Was

In an earlier incarnation of The Force Awakens, Rey asks “Who is Luke Skywalker?” when she learns about the map BB-8 has leading to the Jedi. In the film that made it to screen, she instead says, “I thought he was just a myth.”

In an exchange that might have helped explain why Kylo Ren followed through with the terrible, no-good thing he did, one deleted scene reportedly found Snoke complaining to Kylo Ren about Darth Vader sparing Luke Skywalker. According to Slashfilm, a scene from the official novelization was originally part of the film, and it reads like this:

“Kylo Ren, I watched the Galactic Empire rise, and then fall. The gullible prattle on about the triumph of truth and justice, of individualism and free will. As if such things were solid and real instead of simple subjective judgments. The historians have it all wrong. It was neither poor strategy nor arrogance that brought down the Empire. You know too well what did.” Ren nodded once. “Sentiment.” “Yes. Such a simple thing. Such a foolish error of judgment. A momentary lapse in an otherwise exemplary life. Had Lord Vader not succumbed to emotion at the crucial moment—had the father killed the son—the Empire would have prevailed. And there would be no threat of Skywalker’s return today.”

Han Solo and Princess Leia Were Allegedly Supposed to Reconcile…

…and in that version (or perhaps it was just an idea) of The Force Awakens Han Solo survived to see future sequels. Watch the Mr Sunday Movies video, which appears to be based largely on some older concept art — some of it created before George Lucas sold Lucasfilm to Disney — here: