Yes, Star Wars: The Force Awakens Is Really That Good

Our (spoiler-free) review of the highly-anticipated sequel. 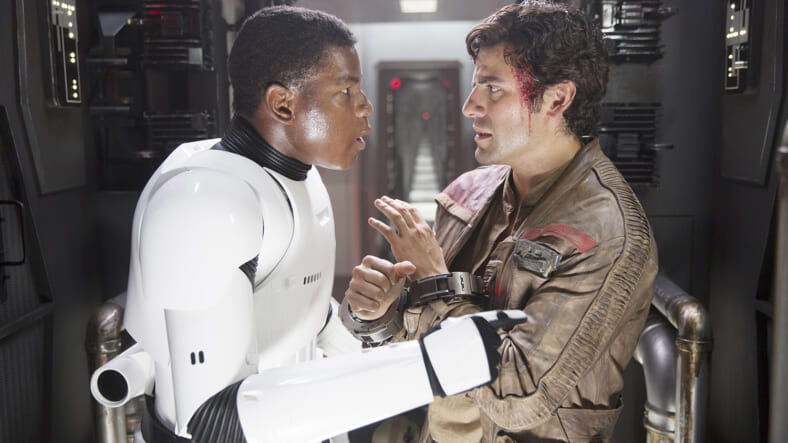 Ever since thousands of eager fans first caught a glimpse of that familiar galaxy, far, far away back in November 2014, we’ve been telling ourselves stories about what will actually happen when Star Wars: The Force Awakens finally premieres this month. Star Wars fans have been optimistic, even exuberant, about the return of Luke Skywalker and his merry band of rebels, but it’s been a cautious optimism. After all, we were hurt once before by the dreadful prequels, and in an era defined by Hollywood’s obsession with unnecessary reboots and sequels, we dreaded seeing one of the greatest space operas of all time be turned into yet another cash cow. The anticipation — the glee, the anxiety the hope, the fear — have all shaped a single story we’ve been feeding ourselves for months: The Force Awakens will be good. Or, at least, for the love of God, not terrible.

Well, to paraphrase a disheveled Han Solo from the trailers, those stories were true. JJ Abrams, the screenwriter who reinvented science fiction on TV with Lost and the big screen with 2009’s Star Trek, did what he’s paid to do and produced an action movie that breathes new life into a beloved franchise. But Abrams also pulled off something of a miracle: He made the first true Star Wars movie the galaxy’s seen in a long time.

How exactly do I describe this feeling without spoilers or resorting to touchy-feely mumbo-jumbo? A writer recently attempted to attribute the success of George Lucas’s original Star Wars saga to the fact that the trilogy was, at the end of the day, a pastiche. Lucas’ space opera wasn’t totally new or original, but it combined the best, most evocative and deeply resonant elements of the classic stories of human culture: the smugglers of the Wild West (Han Solo), the dogfights of the 20th century (X-Wings and TIE fighters), jidaigeki and samurai films (Luke and Vader, armed with lightsabers) and the space adventures that dominated the 60s and 70s. Star Wars was, and is, so accessible to millions of people because it’s familiar, even when it’s alien.

If Star Wars was a pastiche of our culture’s finest tropes, then The Force Awakens is a pastiche of the finest elements that made the original trilogy so damn good. Abrams delicately and dutifully orchestrates a transition from the Old Guard of Luke, Han, and Leia to new protagonists Finn and Rey. Kylo Ren is a fierce heir to the legacy of Darth Vader, a worthy apprentice to the Palpatine-like (and legitimately alarming) Supreme Leader Snoke. Finn (John Boyega) has all the earnestness and righteousness of the young Luke Skywalker staring into the sunset in the opening minutes of A New Hope. X-Wing pilot Poe Dameron could double as young, roguish Solo himself. And as for mysterious scavenger Rey (Daisy Ridley)…well, that’s a story for another time. Despite taking place 30 years after Return of the Jedi in a time when the Jedi are still all but a myth, history has a way of repeating itself.

More importantly, the familiar tropes of the original saga are out in full force, from a tiny droid of major importance to a weapon of mass destruction in the hands of fanatical tyrants to the eternal temptation between the Dark Side of the Force and the Light. The prequel trilogy failed not just because of shitty dialogue and egregious exposition, but by focusing on the wrong elements of the Star Wars saga, the aliens and spaceships and weapons and Force-driven acrobatics. They lacked the heart and soul — the Force — that bound the lives of Luke and Han and co. together and drove the original trilogy forward. The Force Awakens is dripping with nostalgia, its narratives and conflicts all-too familiar but original and thrilling in the best possible way. It is the Star Wars movies fans are looking for.

Of course, The Force Awakens isn’t perfect — but how can it be, with the emotional and cultural expectations that have Abrams “terrified” of the film’s imminent wide release? Abrams, for his part, does a remarkable job of paying tribute to the original trilogy; the movie is riddled with subtle callbacks (as simple as the aging Millennium Falcon’s firing interface) that will delight die-hard fans. But often, it’s those expectations that are the biggest problem for the movie. Throwaway quips meant to evoke nostalgia can land with a thud, while some plot points are almost predictable in their tribute to the past. That’s to be expected when you’re writing a film for millions of people who’ve been living in that faraway galaxy since 1977.

But the movie’s rough edges and awkward moments don’t matter, really. Despite the reliance on nostalgia and familiarity, The Force Awakens still manages to shock, delight, and surprise, to pave the way for a brand new saga in the world-historical journey of the Skywalker clan (there’s one moment in the third act that’s going to turn the entire franchise on its head forever). We see echoes of Luke, Han and Leia in Finn, Rey, and Dameron, but they’re entirely independent, complex characters with their own motivations and their own destinies ahead. Abrams managed to put his own aesthetic stamp on the movie in a way that doesn’t distract from the story. The action sequences are extremely loud and incredibly close (the X-Wing dogfights in particular are, well, wow), but they’re also just right, dynamic and intense and the perfect mirror to our own anticipation from simply being there. He even managed to sneak in a few jokes.

Abrams hasn’t just engineered the perfect blockbuster for Disney; he’s managed to create an honest-to-God Star Wars movie that stands out in a culture of space operas and action flicks irrevocably shaped by Star Wars. No ‘Expanded Universe,’ no animated film, has managed to capture the excitement, the drama, and the raw essence of the original Star Wars saga as well as The Force Awakens does. It’s not a perfect movie, but holy shit if it isn’t the best damned Star Wars project since 1983.In the trailers, just before copping to the authenticity of the Jedi, Han appears in the hallways of his trusted Millennium Falcon. “Chewie,” he smiles, “we’re home.” He’s not just speaking for himself. The Force Awakens has finally returned us to that galaxy far, far away — and we can’t wait to see what’s in store for us next.