‘Star Wars: The Rise of Skywalker’: Rey Looks Like She’s On the Dark Side in Thrilling New Trailer

“We’ve passed on all we know. A thousand generations live in you now. But this is your fight.” 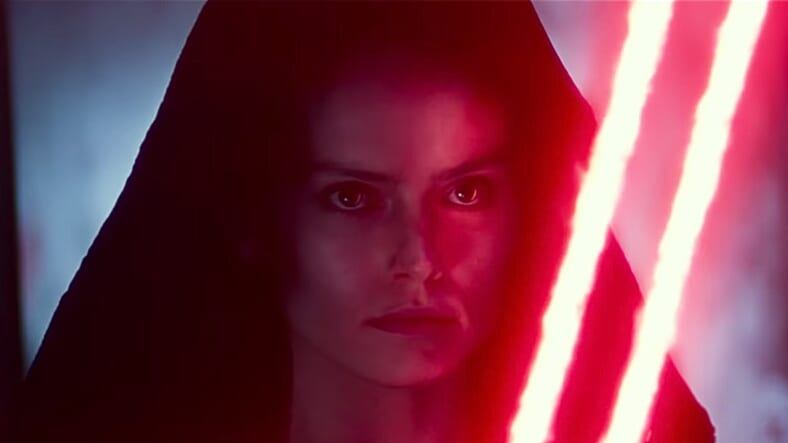 Just what the heck is going on in the newest trailer for Star Wars: The Rise of Skywalker, released August 26 at Disney’s D23 Expo? First, we see iconic scenes from the previous eight movies, then comes the big reveal: Rey (Daisy Ridley) looking like a stone killer Sith Lord in a dark cloak, wielding a wild and wholly original new lightsaber.

Over it all, old footage and new, is a slow-paced, gravelly voice-over, possibly from Luke Skywalker (Mark Hamill).

“We’ve passed on all we know,” the voice says, “A thousand generations live in you now. But this is your fight.”

Things get stranger as we hear what is clearly Darth Vader breathing and the Emperor laughing. Then we see Rey and Kylo Ren (Adam Driver) in combat and at the end, Rey unleashing one of the more badass lightsabers seen in any of the movies, a folding double-bladed version.

A red-bladed lightsaber at that. And that’s a big deal to Star Wars nerds, because the received wisdom across the films is only the Sith and any other adherents to the Dark Side of the Force like Kylo Ren use red lightsabers.

Here’s the synopsis for Rise, such as it is: “The surviving Resistance faces the First Order once more as Rey, Finn and Poe Dameron’s journey continues. With the power and knowledge of generations behind them, the final battle commences.”

We’ll know more about what’s going on when Star Wars: The Rise of Skywalker is in theaters on December 20, 2019.