He has a way with the ladies, the men, and just about everyone. 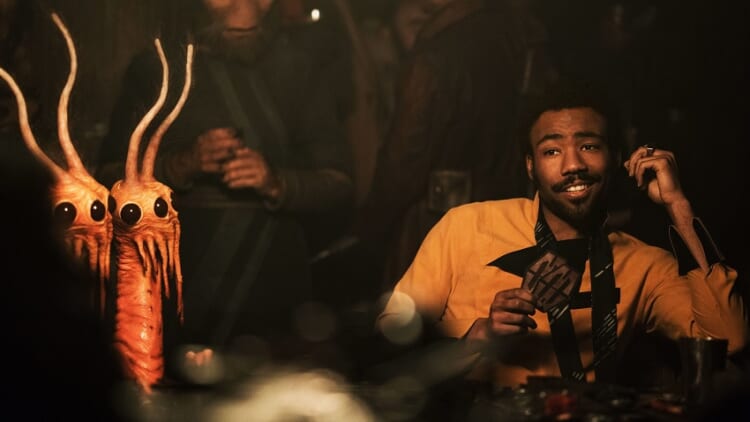 This may not go over well with some fans. According to Solo: A Star Wars Story screenwriter Jonathan Kasdan, Lando Calrissian‘s sexual identity has a certain “fluidity” to it.

“Fluidity,” a.k.a. pansexual, currently defined by Merriam-Webster as someone who is “not solely homosexual or heterosexual.”

Huffington Post reported that LGBTQ fans of the Star Wars movies have long wondered if any of the characters are gay. Among those who have seen Solo, many have apparently felt a vibe from Lando’s dialogue and demeanor. HuffPo asked screenwriter Jonathan Kasdan if the character really was pansexual:

“I would say yes,” Jonathan Kasdan emphatically said.“There’s a fluidity to Donald and Billy Dee’s [portrayal of Lando’s] sexuality,” Kasdan continued. “I mean, I would have loved to have gotten a more explicitly LGBT character into this movie. I think it’s time, certainly, for that, and I love the fluidity ― sort of the spectrum of sexuality that Donald appeals to and that droids are a part of.”“He doesn’t make any hard and fast rules. I think it’s fun,” Kasdan said. “I don’t know where it will go.”

Well. As you might imagine, fans took to social media with their opinions both good and bad.

Hey let’s not completely dunk on the whole Lando being pansexual thing? We can both be happy about it and critical that it likely won’t play out on screen, yes?

So this news on Lando’s sexuality- we gotta stop with this queer baiting. Stop saying these characters are queer/fluid and not show it. This is lazy storytelling and doing the bare minimum. pic.twitter.com/qgXytbAD96

Can’t believe that Lando fucks Chewbacca while screaming “I’m gay! I only love and have sex with men – it’s canon!”

#NOTMYLANDO (spread the word because Kathleen made Lando gay)

Fans who love Lando no matter what have a completely different reason to be disappointed: turns out he won’t get his own standalone movie, despite rumors to the contrary.

Turns out those rumors were sparked by a poor English-to-French translation of an interview Lucasfilm president Kathleen Kennedy gave to a French publication. Stand down, there will be no future film featuring Lando—or a boyfriend. Or girlfriend. Or a droid that functions as a sex toy. Whichever.

Lando Calrissian can do whatever he likes with his life, in the end. He’s a fictional character.

But try telling that to certain Star Wars superfans looking for a fight.