The NBA’s sharpest shooter is playing his own kind of game — and winning. 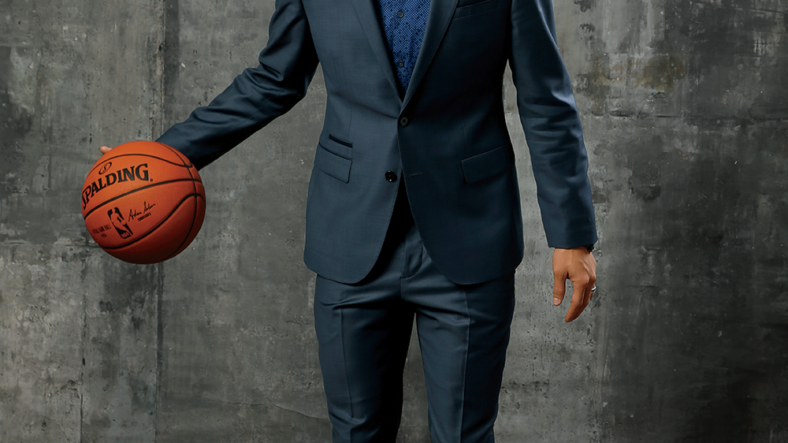 Here is a personal sportswriting philosophy, which works pretty well in life itself: Think first of your wife or your girlfriend, if not your mother. What would it take to make her care about, say, the starting point guard for the Golden State Warriors? (Apologies to the women out there who already know Stephen Curry’s pregame rituals—the double-handed Globetrotter routine, the balls airmailed from the tunnel—by heart.) You might start, as I have, with the press conferences last May, during the playoffs, when he not only cheerfully propped his then two-year-old daughter, Riley, on his lap, but allowed her to speak for all of us who have ever found postgame jock talk tedious. (“Be quiet, Daddy. Be quiet!”) Next, something more recent: Warriors-Cavs, a rematch of last year’s finals, in mid-January. It’s late in the first quarter, and there’s LeBron James, all headband and elbow sleeve, towering over our man and shoving him to the floor in frustration. Don’t feel bad for Dad. Notice the scoreboard: Golden State is already up by a dozen. Now rewind 15 or 20 seconds and you’ll see what has the King so frustrated. Our Warrior hero casually bounces the ball through center court. He takes a couple of quick steps to the left—and then suddenly, disrespecting the three-point line and before a defender can engage him, he chucks it toward the hoop from at least 30 feet out. Swish. His specialty is lobbing bombs—sometimes from farther out still, sometimes without bothering to watch them fall—almost as if on a dare.

Until Steph Curry came along, you would have called a person who exhibits such behavior uncoachable. Now you call him the best basketball player in the world.

Curry, last season’s MVP, is like a walking, dribbling thought experiment: What if a merely tall guy (he is 6’3″) became so good at shooting the ball from virtually anywhere on the court that almost nothing else mattered? As of this writing, the Warriors are on pace to finish with the best regular-season record in the history of the NBA. Yet when Curry is resting, they are no better than the Nets. He is a gaudy ball-handler, to be sure, but not especially known for his distribution or his defense. The drone strikes are the thing. And only deference to tradition, it would seem, is keeping him from firing away more liberally and exposing the three-point rule as the sham traditionalists once feared. Why award a third point to a man for preferring to shoot without the encumbrance of sweaty palms up in his grill? For four years running, he has led the league in three-point attempts. Given the current incentive structure, it’s a wonder Warriors games haven’t devolved into exhibitions of H.O.R.S.E. No need to approach the rim unless you’re feeling frisky.

Like LeBron, Curry was born in Akron, Ohio, though his background is comfortably suburban. His father, Dell, logged 16 years in the league, many of them in Charlotte, North Carolina, where Steph attended high school. Unlike LeBron, Curry has the virtue of relatability, as the branding experts never tire of pointing out. In an era of seven-foot Latvians and flying felines like Kevin Durant, Steph is relatively earthbound. His ability to dunk, like that of your humble-bragging roommate, is a subject of some debate. He went to Davidson, not Duke. He didn’t make his first All-Star game until he was 25. Now 27 and ascendant, he is perhaps the first reigning hoops sovereign since Bob Cousy who could survive a coach-class flight (well, preferably in an exit row) without suffering knee cramps. Granted, calling Curry “the patron saint of the underdog,” as Under Armour does, requires ignoring his relative privilege as well as his royal genes (his brother, Seth, plays too, for Sacramento). He represents a middle-class marketing dream, wherein you can imagine that practicing buzzer-beaters in the driveway from behind the station wagon is the equivalent of working on your knuckleball—an everyman’s gimmick that might just lead to stardom.

His specialty is lobbing bombs — sometimes from farther out still, somethings without bothering to watch them fall — almost as if on a dare.

What’s more, Curry offers hope for reconciling the two most significant developments in modern-day sports: analytics and GIFs. The increasingly ubiquitous advanced stats, which often favor the mundane and even the unseen, have sometimes seemed a drag in such a dynamic game. It’s one thing to confront the obvious: Kobe, stop shooting! But it’s a little dispiriting to reckon with the enlightened notion that all those Iverson crossovers—instant clickbait, before its time—amounted to wasted effort, more or less. With Steph, however, the numbers actually recommend expanding his outlandish repertoire, and the highlight reel has become an unlikely efficiency tutorial. Before Babe Ruth, remember, swinging for the fences was thought to be a counterproductive act of hubris. Now it’s the default. At this rate, maybe Curry pulling up from half-court will end up becoming an era-defining image, like Ruth calling his shot. More airmail, please! Maybe it’s not too late to resurrect hero ball.

Speaking of GIFs, let’s return to that January rematch between the Warriors and the Cavaliers for one last look. We’re in the second quarter now, and the Warriors’ lead has nearly doubled, to 23. LeBron, having ditched the headband, is posting up on the block, menace personified. Then, as he spreads his wings, a palm comes up from behind and under- neath, smacking the ball free. His head snaps across, like a jolted boxer’s, as he tries to regain control, but it’s too late. Slowing it down, you see the moment of recognition—No, not him!—as James identifies his pickpocket: Curry, flashing a little D to go with the razzle-dazzle. A trace of despair washes over LeBron’s face, and then resignation. Dethroned. Curry takes it all the way down for an easy layup.