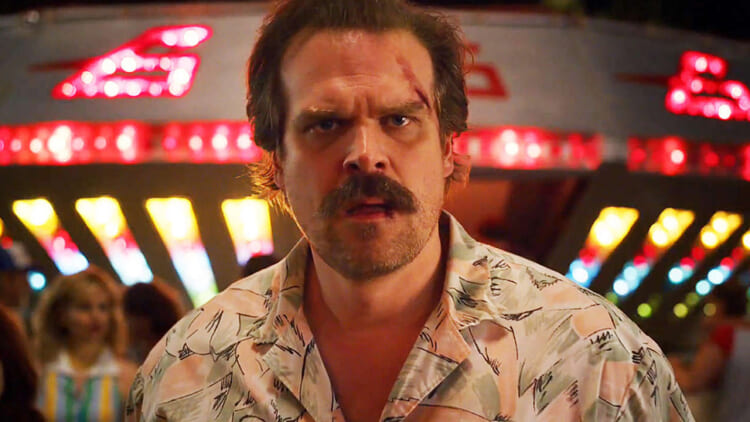 As perfectly portrayed by David K. Harbour, beleaguered yet heroic Hawkins police chief Jim Hopper has become TV icon. With the premiere on July 4th of Stranger Things season 3, he became a fashion icon as well, thanks to the Netflix hit series’ usual strict attention to period detail.

The uglyass pastel Hawaiian shirt is coming back, we’re pretty sure, and we’ll have Hopper to blame.

Hopper’s look was partly inspired by Magnum P.I., the classic detective show starring Tom Selleck–which Hopper is seen watching at one point during one episode.

Amy Parris is the show’s costume designer, and she gave Fashionista the low-down on this particular choice:

“I found a great image of Tom Selleck in the iconic moment of Magnum in the Hawaiian shirt, the light denim Wrangler jeans, a canvas belt and topsider shoes,” explains Parris, put her own twist on that look for Hopper’s night out and added a light beige blazer. “But later he loses [the topsiders] and puts on his work boots that he likes and wears that through the rest of [the season].”To make five multiples of the shirt, Parris bought the last 20 yards of a vintage ’80s fabric and custom-printed each one in an original pattern designed by the team. (The graphics even needed to be in the exact same location on each shirt for continuity.) “David liked the idea of being able to roll the sleeves of the shirt up, just so it’s a little bit more ’80s feeling,” she adds.

Social media reactions make it clear fans are into the look.

I know Hopper's Hawaiian shirt is meant to be a silly wardrobe choice, but hot damn, I would wear the hell out of that TODAY. pic.twitter.com/Xoqa2zZdPj

So I need a source for Hopper’s shirt here. Husband and I have decided we need to cosplay as Joyce and Hopper, wandering around local fairs looking for Russians. 😂 pic.twitter.com/DLBgXoPIam

I am all about Hopper’s shirt in #StrangerThings3 @DavidKHarbour pic.twitter.com/NnJ028oKJe

Hopper, swaddle me lovingly in your iconic new #StrangerThings wardrobe wait is that not how this meme works? pic.twitter.com/Ic4Z4nbB7q

hopper in that 80s printed button up with his gun tucked in his wrangler jeans and that mustache is weirdly sexy… yeah i fucking said it.

So… if you’re looking for a “Hot Dad” ensemble to rock, Hopper’s shirt is unfortunately not on sale–yet.

Give it time, though. And if you’ve been through the decade once already and aren’t feeling a thrill about an 80s fashion rebirth, maybe don’t blame David K. Harbour after all; blame Stranger Things.