Warning: Spoilers ahead for Season 1 ending of the addictively dark hit. 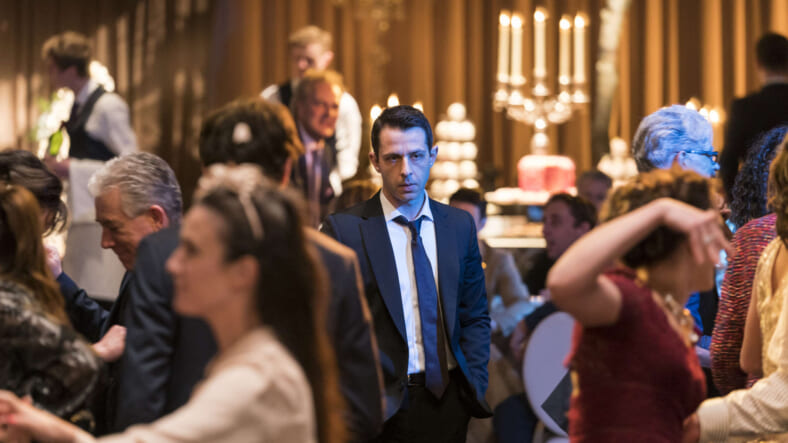 Not all prestige HBO dramas are created equal. For every Sopranos, there’s gonna be a Vinyl. But the network’s best new show, Succession, certainly ended its first season with a bang on Sunday night. Kendall Roy (played by Jeremy Strong) was finally on the verge of seizing his media mogul father’s company with a hostile takeover that he announces at his sister Shiv’s wedding.

But after family patriarch Logan Roy (played by Brian Cox) gives a wedding speech that passive-aggressively skewers his son, Kendall drives off with a waiter to score some cocaine, swerves to avoid a deer and plunges into a lake, Chappaquiddick-style. The young waiter drowns and Kendall, soaking wet, slinks back to the English castle where the opulent wedding is taking place, cleans himself up and eerily hits the dance floor to a Whitney Houston song.

The next morning, Logan finds out about the waiter’s death (his security detail finds Kendall’s room key card with the body ) and offers to clean up the whole mess if his son drops his hostile takeover plan.

Cue the surprise father-son reconciliation: a weeping Kendall collapses into his dad’s arms, and Logan tells him “You’re my boy. You’re my number one boy.” Which allows the whole show to reset for Season 2 that will air next year.

Thrillist caught up with Succession creator Jesse Armstrong about the Season 1 finale what’s in store for Season 2:

Kendall has seemed like the show’s conscience, but you then orchestrated his massive fall in this last episode. How did you plan that out?Jesse Armstrong: You can plan [it like], We need something big at the end of the season or We know we need an episode here which is kind of explosive. You have that slightly symphonic sense of what the rhythms of a show should be, and usually a season needs a kind of bang at the end.

But we didn’t decide we need a bang and then think of 20 different bangs and then choose one. I think I always pitched from quite early in the room that this would happen to Kendall — that he would be involved in an accident and he was culpable in some way. Although, arguable how unusual his reaction is. You might think it’s a cowardly but very human reaction, or you might think it’s desperately awful what he does. I think you could think about it either way.

It just felt right for the end. I mean, not that I wasn’t with a certain anxiety that it might seem kind of soapy or overblown. But it had the ring of you think your life’s going one way, and then you just get totally fucking sideswiped by something else. As long as we could keep that vibe to it, it always felt like it had the feeling of real life about it.

.Armstrong also hinted that the newly-reconciled father and son might stay together in the treacherous show’s second season, at least for a while:

Will there be another power struggle next season, or will you lay off that as you explore the idea of Logan having all this power again without anyone to stop him?

Armstrong: I guess the only thing that’s maybe interesting or useful to say is things have got to change. The forced reconciliation that happens at the end of the season… feels very natural. That’s sort of what Kendall wants to do. I don’t have all the answers for how we go forward from there but we have a bunch of them.

One thing I know that’s real is that hug, and that desire to give in to power, to accept what feels inevitable. We’re not going to turn around and say that was just a joke, there’s a knife in his hand [and] he’s going to stab his dad in the back right away. We’re not going to do that. How we manage the drama, given that that pivot is going to change, we don’t have every answer to, but we’re committed to this quite exciting new world where maybe Kendall and Logan become something of a unit for a while.

What did you think of the Season 1 finale?