Watch The Super Bowl Trailers For ‘No Time To Die’, ‘Black Widow’ and ‘Top Gun: Maverick’

New previews for these hotly-anticipated movies were released during Super Bowl LIV. 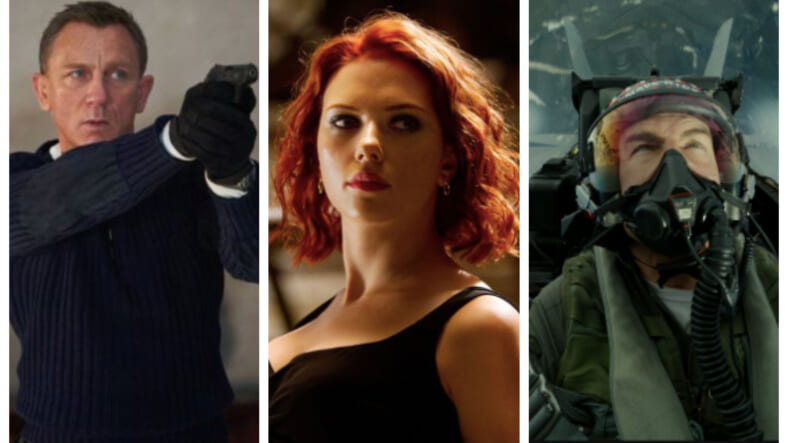 The Super Bowl wasn’t just about the Kansas City Chiefs’ dramatic victory or J-Lo and Shakira’s halftime show, it also unveiled the latest looks at some of the biggest upcoming movies courtesy of all-new trailers. Check them out below.

No Time To Die

The 30-second No Time to Die spot opens with Daniel Craig’s Bond in a hi-tech glider. “Have you ever flown one of these things before?” he asks Lashana Lynch’s Nomi, a fellow spy, who replies, “Nope”. The “Official Game Day” trailer also claimed that “the 25th film will change everything” when it hits theaters in April.

Scarlett Johansson appeared with Rachel Weisz in the 30-second teaser for Black Widow, Marvel’s first standalone movie showcasing Johansson’s Natasha Romanoff character. “At some point we all have to choose between what the world wants you to be and who you are,” she says amid the comic book movie mayhem.

In the Super Bowl teaser for Top Gun: Maverick, Miles Teller is heard telling Tom Cruise’s Pete “Maverick” Mitchell, “My dad believed in you, I’m not going to make the same mistake.” The latest look at the long-awaited sequel to 1986’s Top Gun also opens with Cruise in the cockpit of an F/A-18F Super Hornet, whetting fans appetite further for he movie that is set to take off in July.