Meow we just want to watch the ‘Trooper Bowl.’ 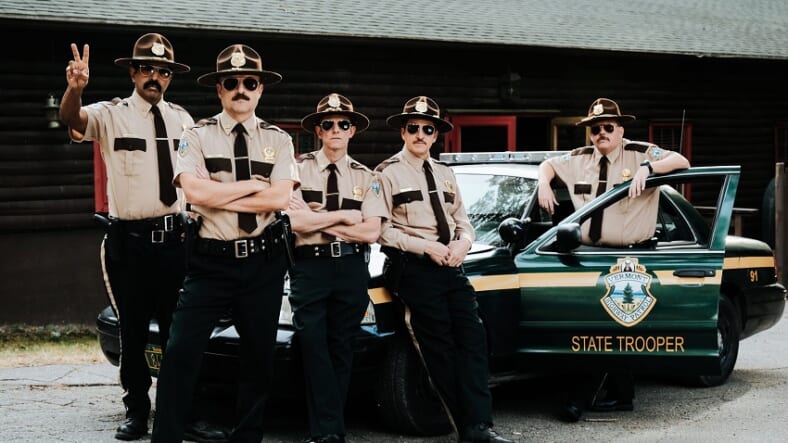 For all we know the opening of this teaser is a joke, and Broken Lizard never even tried to get this spot for Super Troopers 2 in the Super Bowl commercial rotation. But if they did try, would it surprise anyone if it really was just too R-rated?

No. Because a character’s junk smothered in whipped cream and a cherry is not typical Super Bowl commercial fare.

Apparently it costs a few bucks to get a spot during the big game- but it doesn't cost anything to put it online! Go to the #SuperTroopers Facebook page to check out our TROOPER BOWL spot: https://t.co/5M9S1MP7mz pic.twitter.com/hFOYSEy2TN

We are about two months and two weeks from the premiere of Super Troopers 2, so let’s make sure we know what we’ll be getting into with the synopsis from Fox Searchlight:

Everyone’s favorite law enforcement team is back by popular demand with the long anticipated follow up to the cult comedy classic…SUPER TROOPERS. When an international border dispute arises between the U.S. and Canada, the Super Troopers- Mac, Thorny, Foster, Rabbit and Farva, are called in to set up a new Highway Patrol station in the disputed area. Unconventional police work follows, and the result is…SUPER TROOPERS 2.

That sounds like more fun that we should be meowed.

Super Troopers 2 premieres on the most appropriate date ever, April 20.