It’s a match made in hot-sauce heaven. 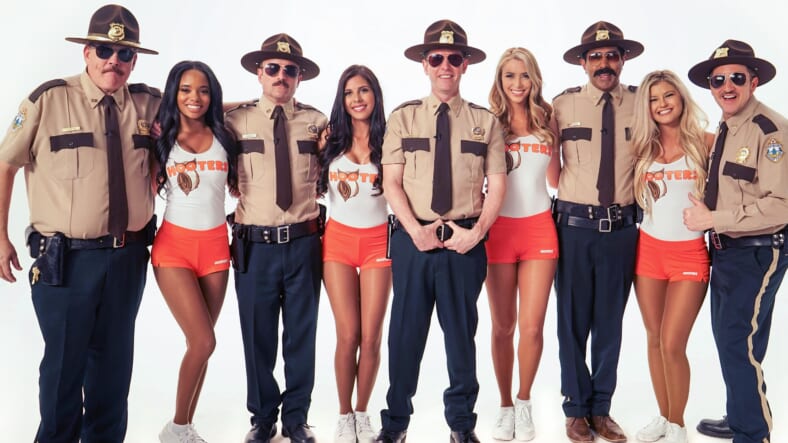 With the release of Super Troopers 2 just a month away, the gang has enlisted some sexy help to drum up more hype—as if we weren’t already totally psyched.

The five Vermont staties suited up for a spicy photoshoot with four Hooters hotties. They even managed to keep hot sauce out of their mustaches.

Two of the wing-touting ladies, Jorra Zayn and Michaela Holliman, then accompanied the men of Broken Lizard to the Auto Club 400 in Fontana, California.

They snapped pics with Hooters-sponsored driver Chase Elliott and issued the command for racers to start revving their engines. Surprisingly, it looks as though shenanigans were kept to a minimum.

Super Troopers 2 rolls into theaters on 4/20. If you’re a little hazy on the plot, refresh your memory with the cult comedy sequel’s official red band trailer and synopsis from Fox Searchlight.

When an international border dispute arises between the U.S. and Canada, the Super Troopers- Mac, Thorny, Foster, Rabbit and Farva, are called in to set up a new Highway Patrol station in the disputed area. Unconventional police work follows, and the result is…SUPER TROOPERS 2.