How to Survive a High-Speed ‘Hobbs & Shaw’-Style Car Chase

Experience a thrill ride straight out of the “Fast & Furious” spinoff behind the wheel of a McLaren 600LT. 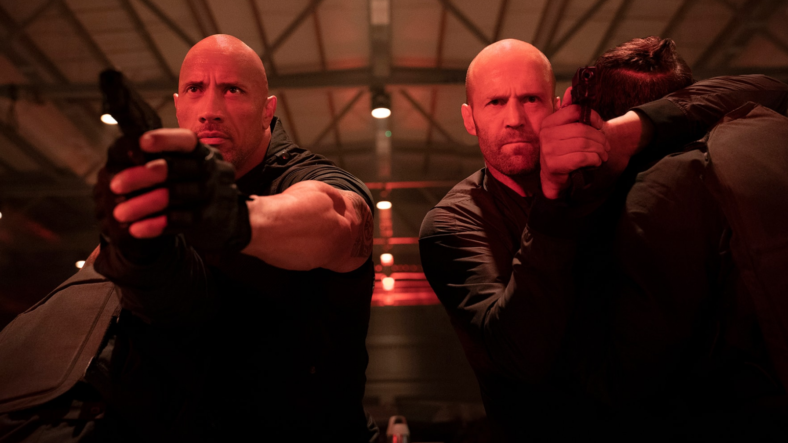 The first time I gripped a steering wheel, I was white-knuckling my way through a south Florida golf course at a blistering twelve miles an hour. I sat on my grandfather’s lap, his right foot working the cart’s gas and brake while I swerved us down the path. There was something magical about sitting in that driver’s seat—I felt grown up, in control, and so deathly afraid of making a mistake—yet completely and utterly invincible. I was free.

“You ever done this before?” I heard through the speaker in my helmet.

I snapped out of my reflections and glanced over at Adriano Medeiros, the pro driver sitting in the passenger’s seat. Then I looked out through the windshield at the expanse of track stretching into the distance, and I gripped the wheel a little tighter.

“Not exactly,” I said with a grin.

I was at the world-famous Silverstone Circuit, home of the Formula One British Grand Prix. This was no ordinary visit—it was to celebrate the digital and Blu-ray release of Hobbs & Shaw, the Fast & Furious spinoff starring Dwayne “The Rock” Johnson and Jason Statham. In true Fast & Furious fashion, I was there to find out what makes the series’ cars so special, how to survive a high-speed car chase, and whether or not I could handle the fastest, most stylish cars that British engineering has to offer.

“The majority of what we did was remove the limits that keep drivers safe,” Tom Derbyshire told me at the track. Derbyshire was a Vehicle Line Manager working on Hobbs & Shaw, modifying brand new McLarens to get them ready for action. That meant pushing the cars beyond their typical abilities—including, as any diehard Fast & Furious fan will recognize, the ability to go crazy fast in reverse.

“I can’t remember exactly how fast it goes in reverse normally—say, twenty miles an hour,” Derbyshire said. “That’s much faster than anyone would normally go. But not quite quick enough to do a 270-degree J-turn around a moving bus.”

He was referring to one particularly pulse-pounding Hobbs & Shaw scene, in which Deckard Shaw (Statham) drives a McLaren 720S through the busy streets of London, trying to evade self-proclaimed “bad guy” Brixton Lorr (Idris Elba).

“Having not been involved in movies before, the thing that surprised me was how much of it was genuinely shot for real,” Derbyshire continued. “There’s sometimes an assumption that there’s more CGI than there actually is. The reversing and the J-turn around the bus—all real. The bus was actually there.”

Derbyshire insisted that the Hobbs & Shaw cars were firmly grounded in reality, but looking over at the 720S, I couldn’t help but wonder if I had wandered into a dream. It’s everything a car lover could want, and more—a sleek, vicious design inspired by the great white shark, an M840T twin-turbocharged V8 engine, stunning dihedral doors that open upward, not outward. It goes from zero to sixty in 2.8 seconds flat, and maxes out at a baffling 212 miles per hour.

All of which made the 720S the obvious choice to be Deckard Shaw’s automotive counterpart. A Fast & Furious fan favorite, Shaw is known for bringing a unique blend of sophistication and intimidation to the screen. “There was no other car that Jason [Statham] wanted to represent his character,” director David Leitch told me. “It’s precise, it’s polished, it’s elegant—it’s him.”

On that chilly morning at Silverstone, I soon found myself behind the wheel of a McLaren 600LT, the equally formidable cousin of the 720S. I had never had hundreds of thousands of dollars of machinery at my fingertips before, and while I didn’t know if I was financially responsible for any damages, I really, really didn’t want to find out. With Adriano feeding me a constant stream of helpful tips, I hit the gas, felt the eager rumble of the engine, and accelerated onto the track.

I started off easy, getting a feel for the curves while trying not to seem like a total rookie. The 600LT wasn’t so much obeying my commands as humoring my requests, turning and braking exactly when I wanted it to, but always going just a little faster than I expected, as if to remind me who was really in charge.

When the muscles in my neck and arms finally started to unclench, I began to really open it up on the straightaways, going faster and faster—100, 110, 120 miles an hour. The ferocious whir of the engine flooded my senses as I rocketed around corners, the car throwing my weight left, right, and forward with each shift in momentum.

As I toed the line between in and out of control, with every cell in my body geared toward the singular purpose of driving, I felt it again—that almost mystical fusion of fear and invincibility. It was exhilarating, like standing on top of a mountain and daring to look down. Deckard Shaw, I thought to myself, you may be onto something.

By the time Adriano directed me back to the garage area, I had topped out at a max speed of 131—not quite as fast as I was hoping to go, but still pretty outrageous.

There was one last driving experience on the agenda, perhaps an even more quintessentially Fast & Furious one—a car chase. Two McLarens would zip around the track, pursuing and overtaking each other in a high-speed dance of metal and glass. This time I settled into the passenger seat of a 720S, entrusting my life to a pro driver named Mike. “Feel free to go as crazy as you want,” I told him as we started off. “I don’t really get motion sick.”

Mike took this as a personal challenge.

Before long we were tearing across the asphalt at ungodly speeds, the tires screaming in thrilled appreciation. I could only brace myself against the interior and hope for the best as I watched the other 720S pass dangerously close to my window before vanishing behind us. I glanced at the speedometer: 160 miles per hour.

Mike was unphased, however, maintaining an expression of supreme cool broken only by an amused smirk whenever I let out an especially enthusiastic Holy shit! He drove like a true Fast & Furious road warrior, perfectly demonstrating Adriano’s advice for handling a car during a chase: “Look far ahead and be ahead of the car,” he told me. “When you’re overtaking or even being overtaken, your moves have to be decisive and committed.”

At last, Mike and I finally pulled off the track and came to a stop. I grinned and thanked him for the craziest ride of my life, then stepped out of the car and went to look for some antacids.

As wowed as I was by the cars’ incredible performance and raw physical beauty, I slowly began to realize that the significance of Fast & Furious cars—indeed, any car—goes beyond a simple spec sheet. “They’re so important to American culture,” Leitch later told me. “Everyone remembers their first car. Mine was a Chevette, an old beater, and I had it for two days before crashing it in an intersection. No one was hurt, thank god.” He smiled and shook his head at the memory. “I remember my dad going, I just got you that car!”

Just as the 720S reflects Shaw’s personality, a car becomes deeply connected to who we are and where we are in life. Our first car signals our emergence into adulthood, and all the autonomy and freedom that come with it. We might then move on to a bigger, more comfortable vehicle, to accommodate a growing family. And high-end sports cars act as a kind of ideal, a symbol of the personal and professional success to which we aspire.

Ultimately, a car isn’t just a car—it’s a part of our story. My grandfather’s golf cart may not exactly fit in with the Hobbs & Shaw vehicles, but it still shaped some of the best times I’ve ever had with him. And when we all finally get to where we’re going—in whatever ride, going however fast—those are the memories that will matter the most.