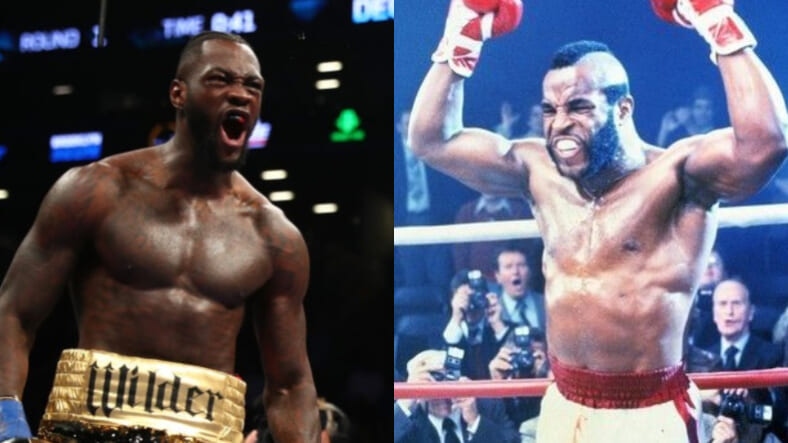 WBC heavyweight champion Deontay Wilder is taking a swing at getting a huge part in the next Creed movie.

One of the gossip site’s reporters then caught up with none other than Sylvester Stallone to ask if he’d write off on Wilder’s acting dream.

“The answer is yes…come one, come all,” Stallone said before joking that the 6-foot-7-inch athlete is “not tall enough” for the part.

Wilder had previously told TMZ that his “passion is acting” when asked his post-fight career prospects.

After boxing, that’s what I want to convert to,” Wilder said. “I want to act like I’m getting hit and not actually get hit.”

It wouldn’t be unprecedented. Real-life boxers have been cast in both movies from the Rocky spin-off franchise, which star Michael B. Jordan as Apollo Creed’s son, Adonis Johnson Creed.

Unfortunately, Sly—who recently announced that he’s retiring his career-making character—also said that he wouldn’t mentor Wilder in preparation for the role.

But before Wilder heads to Hollywood, he could be facing Tyson Fury again in a sequel to their riveting superfight that ended in a controversial draw on December 2.

The WBC recently sanctioned a rematch between the two heavyweights.

“Wilder and Fury gave boxing one of the best fights in the heavyweight division in a long time, which has created tremendous popular demand for the fans to see a rematch,” the organization said in a statement.

“The WBC is happy to confirm that a direct rematch has been approved and will create in a ruling which will also consider the mandatory status of the division.”

Ridiculous as it may seem, the Creed star tentatively called out the 50-year-old Jones Jr. in an interview with TMZ.

“Roy Jones, that’s my dude, bro,” Jordan said. “I feel like I could do my thing a little bit. I could hold my thing, right now, but in his prime, nah.”

Don’t even think about it, Michael.