This would’ve been epic. 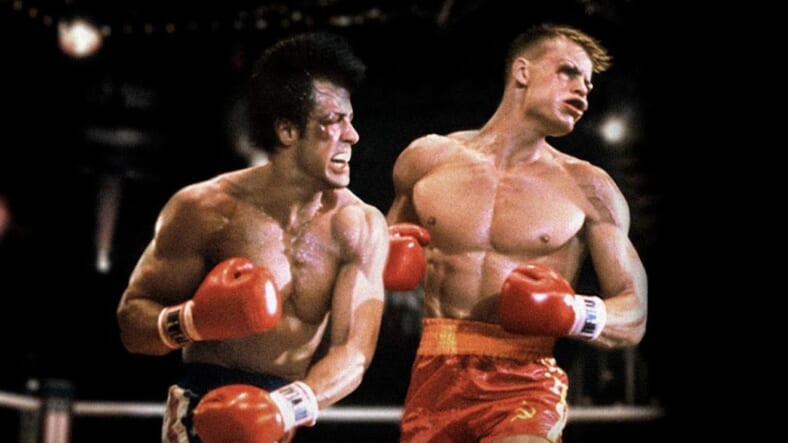 Rocky Balboa (Sylvester Stallone) and his towering Russian rival Ivan Drago (Dolph Lundgren) were set to square off again in a scene in Creed II.

But that scene was cut, and according to Lundgren, this “really upset” Sylvester Stallone, who ultimately posted footage of his and Lundgren’s rehearsal—see below.

The fight was set to happen after the hospitalization of Adonis ‘ Donnie ‘ Johnson Creed (Michael B. Jordan), whose first battle with Drago’s son Viktor (Florian Munteanu), left Drago disqualified and Creed in seriously bad shape.

The set-up: A fight promoter and the Dragos go to the hospital to gin up more buzz. Once there, the temperature rises considerably and Balboa and Drago come to blows.

Lundgren told about the cut scene at a Utah comic con. Comic Book Resource has more:

“So Rocky comes down in the lobby, and we basically [say], ‘We’re going to go up there and talk to him, take some photos.’ [Rocky says], ‘I can’t let you do that.’ So then there’s a kind of shoving match, and I take a swipe at him, and then we end the fight in the lobby,” Lundgren said at FanX Salt Lake Comic Convention. “It was fun. It was interesting, because I hadn’t thrown a punch at Stallone since ’85, because in Expendables, we’re on the same side.”Because Stallone “worked all day doing dramatic stuff,” the Rocky star entered the lobby “not in a good mood.”“I could see people clearing out. I was like, ‘This is not going to be good, I gotta get in a fight with this guy now?’ He’s also producing the movie, he’s my boss, all of that,” Lundgren joked. “It worked out fine, we both enjoyed it…”

Sadly, the scene was left on the cutting room floor, and Lundgren said Sylvester Stallone “was really upset, he wanted it in there.”

In the scene, Drago refers to his 1985 fight against Apollo Creed and says that “this Creed is still alive.” Then he pushes Rocky and lands some punches of his own. Security breaks up the festivities.

Stallone did comment on the cut footage when he posted it on Instagram, saying “It would’ve been extraordinary. But regretfully it was cut.”

Too bad, because if we have to wait too much longer to ever see Rocky and Drago come to blows again on the big screen, the chances are good that next time they’ll just be beating each other with their walkers in a retirement home.