The 9 Kinds Of Nutshots You’ll See in the NBA

In honor of Draymond Green, a look back at the league’s greatest—and most painful—groin shots. 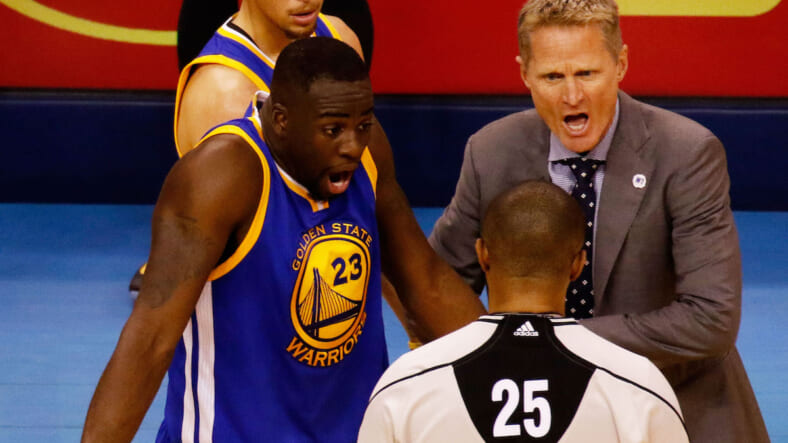 When Warriors forward Draymond Green kicked Thunder center Steven Adams in the kiwis on Sunday night, sending the giant New Zealander to the ground in a heap, the NBA’s Western Conference Finals began to look like an episode of America’s Funniest Home Videos. Not since Bob Saget was yucking it up with a live studio audience has TV seen so much footage of a man getting hit in the sack.

After the game, attention turned to the league office and the punishment it would inevitably levy against Green. The big question: Would he be suspended? The answer came last night. The NBA fined Green $25,000 but will allow him to play in game four, a huge relief for Warriors fans of those of us who love NBA players that act like WWE heels.

And so ends one of the greatest testicle-related sagas in the history of the NBA, a league that is no stranger to man on manhood crime. Let us take this opportunity to dive deeper into this phenomenon and break down all the different ways NBA players hit each other in the grapes.

The leg flail It might sound like recency bias, but Green’s kick to Adams’ “midsection,” as NBA broadcasters love to call the balls, really is the greatest NBA nutshot ever. Never before has a player been able to smash an opponent between the legs and legitimately claim innocence. But Green can because he kicked while shooting, something he does all the time. Whether the kick is necessary or just a way to occasionally take out a defender, no one knows.

The ball on ball Only a player of LeBron James’ caliber could nail a moving target with a thrown projectile. Somehow, D’Angelo Russell survived this.

The screenChris Paul is the league’s master of the low blow. Earlier this season he showed how a player can lose his defender without nifty dribbling or help from teammates. Just smack him in the nuts and boom, you’re playing four on five.

The reach around What do you do when you’re behind a guy but still want to hurt him where it hurts most? Reach under there and grab a hold to something sensitive.

The “I don’t even care” Watch Marcus Smart essentially request a suspension but doing nothing to hide this hammer fist to the balls of Matt Bonner.

The elbow It’s not often an NBA player finds himself in a position to elbow another man in the groin, but Ray Allen did back in 2009. Extra points to Anderson Varejao for refusing to flinch.

The blocked shotUnable to reach the basketball as Channing Frye hoisted it up from three, Kevin Garnett went for Frye’s balls in an attempt to alter his shot on this play in 2011. It worked.

The “I love you man” Don’t confuse the nutshot wth the dick tap, a sign of camaraderie among guys who spend a lot of time together in locker rooms. Pau Gasol and Serge Ibaka may not be NBA teammates, but they play together under the Spanish flag, which is why Pau had such a big smile on his face when he did this to this to Serge’s Ibaka.

The Rodman Only The Worm would take the artful nutshot off the court and deliver a low blow to a lowly camera man. Of all the outrageous things Rodman did on and around the court in his career, this is tops.