She’s too sexy for this feud. 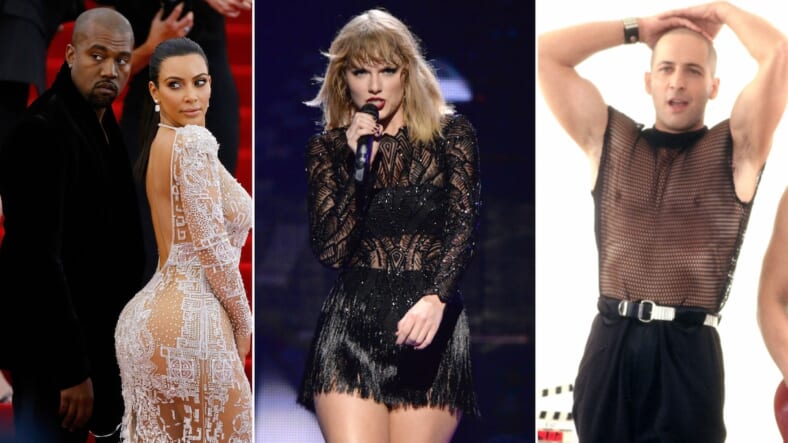 Taylor Swift is back in a vengeance.

Her newest single, “Look What You Made Me Do,” is a pointed diss track against Kim Kardashian and Kanye West, with whom she has long-standing beef.

“I don’t like your little games/Don’t like your tilted stage,” she sings, which is likely a reference to the titled stages Kanye used during his “Saint Pablo” tour.

T-Swift is looking to get even. In 2016, Kanye released the song “Famous,” which included the now-infamous lyric “I feel like me and Taylor might still have sex/Why? I made that bitch famous.”

The video was even more shocking.

Kanye was referring to the night he interrupted her “Best Female Video” acceptance speech during the 2009 VMAs.

Swift hit back at the lyric, but Kim Kardashian leaked Snapchat videos revealing Taylor Swift signing off on the lyric before the song ever dropped. In her defense, “bitch” was not yet included.

The fallout tarnished T-Swift’s innocent, good-girl reputation. Perhaps that’s given her freedom to release the slam track she wanted.

“The old Taylor can’t come to the phone right now … ’cause she’s dead,” TayTay yells midway through the song.

Taylor Swift had some help this time. Not from her sultry, iron-clad #squad but rather from members of the early ’90s pop trio Right Said Fred. You know… the bald dudes who sang “I’m Too Sexy”?

Swift apparently sampled the same rhythmic pattern from “I’m Too Sexy” in the chorus of “Look What You Made Me Do.”

I guess those are good guys to have on your side?