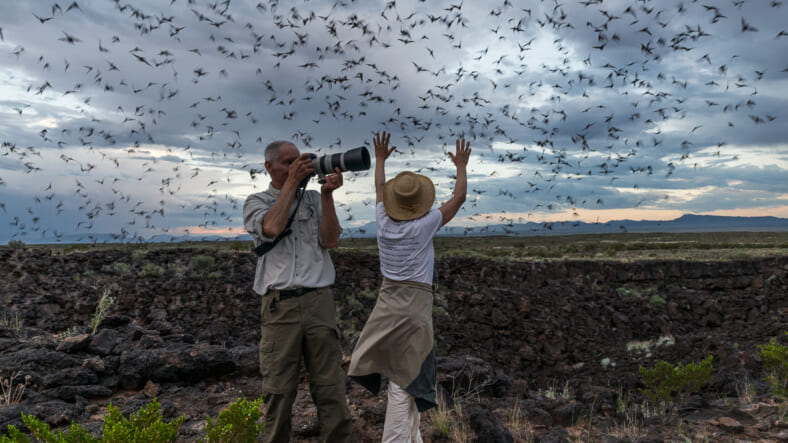 Ted Turner Expeditions (TTX), the newly launched eco-adventure and hospitality company founded by the billionaire media mogul and noted sportsman, is debuting a trio of exciting new adventures for well-heeled explorers. Here are the highlights:

Guests receive access to the Spaceport Command Center (SCC), home to Mission Control, on a tour of the 18,000-acre campus. At the Ranch you’ll encounter Cretaceous period dinosaur bone fields, exciting wildlife, views from the summit of the Fra Cristobal Mountains, and more. For an additional fee, guests with private jets can opt to land on Spaceport America’s two-mile-long Spaceway.

Guests will depart from their home base of Sierra Grande Lodge & Spa in Truth or Consequences, New Mexico (located between Ted Turner’s Armendaris and Ladder Ranches) in the early morning, arriving at Armendaris Ranch at dawn to view the first rays of sunlight striking the jagged Fra Cristobal crest, while the expert pilot and ground crew inflate the balloon and ready the gondola.

Views from above will be of Armendaris with its 360,000 acres of wild Chihuahua desert, private mountain range, bison herds, big horn sheep, and mountain lions, among others. The ranch is larger than Canyonlands National Park, and is accessible only to Ted Turner Expeditions guests.

Armendaris Ranch is also home to the nightly exodus of 1.6 million bats from the Jornada Bat Cave, a truly incredible sight. The cave is a complex of two massive lava tubes which serve as a seasonal home to the bats, principally of the Mexican Free Tail variety. Every evening, the entire bat population emerges to feed in what appears to be a “river of bats.”

Occurring from June to September, this spectacle in the sky also draws dozens of birds of prey that take advantage of the massive number of bats in one place to feed. It’s like a Harry Potter movie come to life.