It’s gonna be tough to get off the couch. 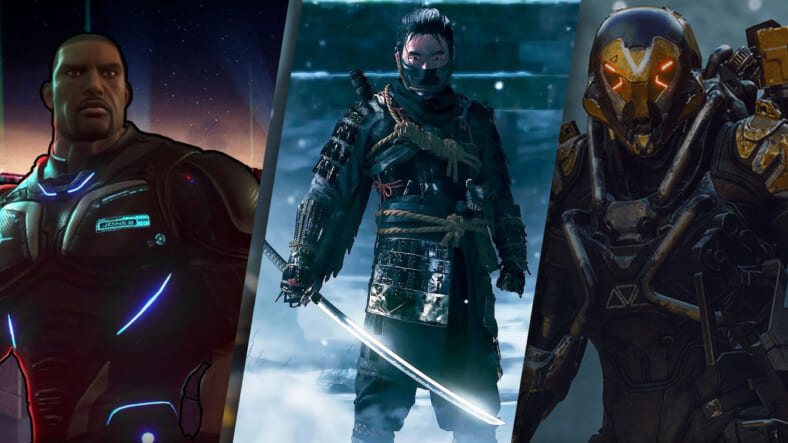 2018 is in the books and it had some major high points to contribute to video games, but now it’s time to start getting hyped up for the most epic games set to hit consoles in 2019.

Here are the 20 biggest games slated for 2019, in order of their release dates.

Classic, side-scrolling Mario action is coming to the Nintendo Switch nice and early in 2019. New SMB U Deluxe heaps on some shared-screen gameplay to make this one fun solo or with a companion on Nintendo’s latest hardware. (January 11)

The insanely awesome Suda 51 is behind this sequel to No More Heroes. Travis, the world’s best assassin is getting another go-round and the signature style from the first game seems to be intact for his return. (January 18)

Gamers have been waiting for years to see the next installment of the Kingdom Hearts franchise that leverages a huge library of Disney characters for its epic role-playing action adventures. Kingdom Hearts 3 is bound to be a worldwide phenomenon. (January 25)

Part racer, part puzzler, Trials Rising is set to bring the fantastic motocross to new heights. International locations, new treachery and a boatload of tricks up its sleeve, Trials Rising is sure to be an addiction for many gamers after its mid-winter launch. (February 12)

Far Cry’s open-world gunplay returns for another take on surviving a cult-riddled landscape. This time it seems you’re at the mercy of a creepy set of twins who rule their countryside with the same iron fist as a long line of Far Cry baddies. (February 15)

The bleakness of Metro returns and Exodus is set to push the boundaries of choice available to you in a Metro game. This is a fan favorite series, and expectations are running high for what the studio behind it can accomplish in their third game. (February 15)

Weariness behind EA’s overall philosophy and treatment of their fans aside, Anthem shows a lot of promise with its cooperative, mech-warrior gameplay. A beta scheduled for late in January may ultimately make or break this new IP but hopes are running high for Anthem’s action-packed experience to buck EA’s recent slate of underwhelming games. (February 22)

Delayed from its originally scheduled 2018 launch window, Crackdown 3 will open up the series’ supercop gameplay into a world of online multiplayer so friends can bust heads, wield huge guns and scale buildings together. Here’s hoping the extra dev time will make Crackdown 3 an early breakout in 2019. (February 2019)

Another long-awaited sequel is finally arriving in 2019 to carry on a story that was left hanging years ago. Devil May Cry 5 reunites several main characters from the ongoing DMC story while bringing the entire endeavor into a gorgeous episode made for modern hardware. (March 8)

Activision is pulling out the stops for this stealthy ninja adventure that’s set to be one of the most difficult games of 2019. Sekiro will offer up a huge world to explore while honing your ninja skills and could be the start of a huge new franchise for the publisher behind Call of Duty. (March 22)

The netherworld returns with its iconic roster of fighters for the next installment in the Mortal Kombat world. Expect a major push to continue MK’s reign as a staple in eSports arcade fighting action. (April 23)

A zombie game that seems to borrow heavily from the style of The Walking Dead, Days Gone will be the next PS4 exclusive to put story front and center. There’ll still be a fair amount of creativity needed since Days Gone will reward your approach to zombie-killing so feel free to explore the unusual when setting your traps for the undead. (April 26)

An underwhelming end to the original wasn’t enough to stop a sequel in the Rage world that seems to borrow major components from the world of Mad Max. The post-apocalyptic shooter lets you loose with only a minor moral compass and a major hard-on for killing everything in sight. (May 14)

The Last of Us Part II

The late-date release is still awaiting an official sanction but The Last of Us Part II promises a deep and gripping continuation to the 2013 game of the year. Sony has been tight-lipped about many elements of the game, but the addition of a multiplayer component could be the thing that makes The Last of Us Part II one of the best games of 2019. (Q4 2019)

Star Wars games tend to be amazing or awful, but the team at Respawn – the guys who made Titanfall – have produced quality games and it’s exciting to know they’ve been trusted with the Star Wars franchise after the Battlefront reboots have been panned as moneygrabs by EA, to the point that Disney almost pulled their plugs. Hopes are running high as the world waits for details to emerge about this potential blockbuster. (Q4 2019)

2019 will bring with it the next installment in the Gears of War franchise and Gears5 is looking to set the bar higher for huge action sequences, heavy gunning and locust-killing. The already-deep story is being brought to new places and Gears fans should be psyched to see where Microsoft is taking this huge third-person shooter. (TBD 2019)

Ori and the Will of the Wisps

The highly-styled world of Ori returns for a new adventure, combining stunning level design and fantastic platforming. Set to be bigger and better than its predecessor, this Xbox-exclusive will be the indie-darling of 2019. ( TBD 2019)

Ostensibly set to be Fallout but set in space, The Outer Worlds is also looking to sidestep the pitfalls of Fallout 76 that have irked gamers recently. The pedigree of devs behind The Outer Worlds may be enough to carry it through on rep alone but the killer looks they’ve shown off in trailers so far are keeping the hype train running hard on this one. (TBD 2019)

Sony’s newest IP is set to transport gamers to feudal Japan where honor and revenge fuel the plot. Ghosts of Tsushima looks to be an enormous game that’s bound to impress with a deep, winding storyline and characters that’ll add to Playstation’s recent achievements. (TBD 2019)

Kojima’s high-profile game needs mention here because, in the event it actually does come out in 2019, it’s likely to be a game of the year contender. Incredible graphics and a notable cast, starring Norman Reedus, Lea Seydoux and Mads Mikkelsen, make Death Stranding one to follow but Kojima’s notoriety for long development leaves a big question mark on whether he’ll unleash his latest opus this year or sometime in the roaring 20s.