Prepare for your next gaming obsession with this list of the buzziest new games for Xbox, Nintendo and Playstation, along with trailers and release dates. 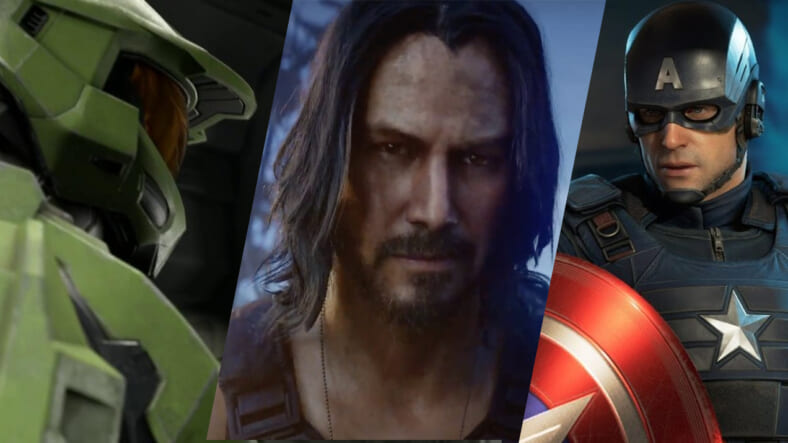 E3 2019, the annual video game mega-conference, has unveiled the industry’s biggest upcoming releases. Here’s everything you need to know about the most buzzed-about games coming to a console near you:

The sad truth about this year’s Madden iteration is that its main focus seems to be making Madden 20 less frustrating than Madden 19. Reducing time between plays and making defensive play more accessible are some of the highlights about the upcoming edition. Make no mistake–those are welcome changes–but an injection of true innovation into the age-old NFL simulator are feeling long overdue.

The Xbox-exclusive franchise is back for another romp through a post-apocalyptic, alien-infested future. The ongoing Gears story is set to get fleshed out in all-new ways, potentially the most exciting aspect of Gears 5 is a crossover character pack for pre-orderers that’ll let you play as a T-800 Terminator or as Sarah Connor, played by Linda Hamilton herself.

The loot hunt goes galactic with the return of 2K Games’ fan-favorite RPG-Shooter. The sprawling cast of batshit-crazy characters and a twisted sense of humor puts Borderlands 3 in the front-running for one of the best games playable at E3. The guys at Gearbox, the studio behind the series, were good enough to drop an entirely new DLC for Borderlands 2, subtly reminding everyone that this franchise kicks ass and the hype for the new game is well-deserved.

New year, new FIFA. Incremental upgrades to the gameplay are standard for the planet’s biggest sports game; this year the focus is on manual defending and a revamped shooting system. The jaw-dropper might be the all-new indoor “Volta Football” mode that’ll feature 5v5 play that should up the pace compared to the traditional on-pitch matches that have made the series a favorite for decades.

Naming issues aside, Call of Duty always brings the goods when it comes to fast-paced competitive action. Don’t call it a reboot since it’s more a reimagining of the iconic COD game with familiar characters in unfamiliar circumstances. Tack on some of the franchise’s signature competitive online modes and the return of a story mode and there’s no chance this won’t be a fall blockbuster.

Highly stylized and packed with some killer weapons, The Outer Worlds is a new shooter from Obsidian Entertainment, which has been folded into Microsoft’s cadre of first-party studios. Expect a hellzapoppin story to carry through this spaced-out first-person shooter

There’s no denying the appeal of a well-made Star Wars game and, for the first time in a while, it looks like EA might do some good with their exclusive right to make them. Fallen Order is a third-person, light saber-wielding space adventure that puts you in the robes of a young Jedi on the run from a freshly unmasked Empire. Hopefully this one plays as good as it looks when it arrives later this year.

Big guns, loud noises and endless cannon fodder; there’s plenty of good reasons to get into Doom’s first-person shooting action. An entirely new battlemode coming to test both wits and trigger fingers is just icing on this bloody cake.

One of the biggest games on Nintendo Switch is getting an expansion that will keep the hardcore coming back and might even entice some newcomers to join the fray. Banjo Kazooie enters the ring and, as one fighter, will bring a unique humor and style to Nintendo’s world-famous brawler.

The long-awaited reboot of the 8-bit game that kicked everyone’s ass in the 90s, Battletoads is finally incoming. Looking great but remaining equally tough, there’s a good chance Battletoads’ side-scrolling gameplay will make gamers want to rage-quit just as hard in 2019.

The spooky style of Luigi’s own series makes a move from a mansion to a hotel. There’s tons to explore and lots of hidden treasure to find in the upcoming Nintendo Switch game that’ll mark a third titular outing for Mario’s superbro.

The thoroughly underrated Watch Dogs is returning for a new subversion of society, this time taking on London and all of its Big Brother invasions of privacy. As an elite hacker, expect to piggyback on the omniscient security apparatus that pervades the city and use it to your advantage in fantastic ways.

Rainbow Six Siege has kept a rabid fanbase of tactical shooters and tight-knit teams these past few years so it’s nice to see that Quarantine is incoming to take up its mantle. The game still requires tons of coordination and cooperation among squads to kill zombies but will focus less on the competitive aspects that Siege was known for.

When Cyberpunk 2077 made its debut at last year’s E3, it was little more than a flashy world and a cool premise. A year later, the sci-fi RPG is looking a hell of a lot more polished, defined and, possibly best of all, features Keanu Reeves as an in-game supporting character. Whether you’re into this style of game or not, the idea of playing with John Wick as an ally will undoubtedly make this a must-buy for many.

It’s definitely jarring that the new Avengers game doesn’t feature the actors we’ve come to love over the past decade of the MCU but let this serve as a reminder that last year’s Spider-Man game didn’t need Tom Holland to be as good as it was. Instead, keep an open mind and focus on the fact that a third-person action game starring Earth’s mightiest heroes has boundless potential to be fun, especially when you can play online with friends.

It appears George R. Martin has taken another break from finishing the damn Game of Thrones books to collaborate with From Software and Bethesda to make a video game. Martin’s fantasy chops look to be taking a Norse turn in Elden Ring and that’s a welcome addition to the fantasy genre. It’s definitely worrisome that an author known for killing characters is partnering up with the minds behind the uber-challenging Dark Souls game. Expect this one to beat you up, physically and psychologically

A cat and mouse game between two assassins takes a Groundhog Day kind of turn. Edge of Tomorrow may be the better analogy given the gunplay packed into Deathloop but that’s still a solid premise for any new IP that’s looking to dish out a mind fuck while staying fun to play.

Aiming for a creepier vibe, Ghostwire: Tokyo introduces you to a world where people have inexplicably vanished out of thin air. The game promises an overarching mystery to solve and lots of fighting against the occult and the supernatural.

The game that launched Microsoft’s original Xbox is set to launch Microsoft’s latest Xbox too. Confirmed to be a day one title for whatever Project Scarlett turns out to be, Master Chief’s latest adventure promises to be a blockbuster worthy of the series’ 18 year pedigree.

The Legend of Zelda: Breath of the Wild 2 (In Development)

There’s little more than hype in this teaser but for the sequel to a unanimous game of the year like the original Breath of the Wild, that’s enough. Simply knowing that there’s more adventures in store for Link and the wide world Hyrule coming for Nintendo Switch will carry everyone through to next year’s E3 where, hopefully, Nintendo can share a bit more.