‘The Invitation’ Is the Best Horror Movie of the Year

We review this spectacularly creepy offering. 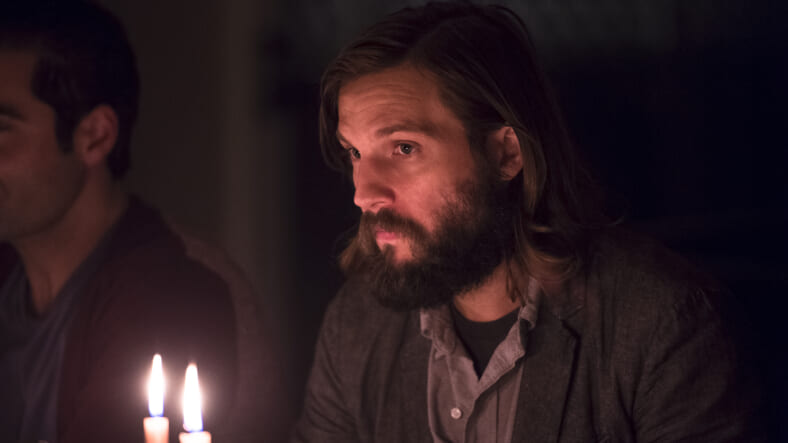 For a film so full of genre tropes and familiar scenarios, The Invitation somehow manages to keep you guessing.

It’s a slow-burn paranoid thriller that exhibits total control over the audience, presenting one compelling argument only to dismiss it with a new, equally believable theory moments later. By the time it reaches its insane conclusion, all questions have been answered, and it’s a grimly satisfying end.

The set-up is simple: a group of old friends gather for a dinner party hosted by Eden (Tammy Blanchard), who has been mysteriously absent the past two years. One of the guests is Eden’s ex-husband Will (Logan Marshall-Green), who seems distracted and haunted by their shared past and can’t help but take note of the host and her new beau’s suspicious behavior.

Is this gathering simply a harmless celebration of Eden’s return, or something more terrifying? As Eden and her new partner David’s (Michiel Huisman) new “friends” start to pop up, they sheepishly present the group with a bizarre cult-esque recruitment DVD showcasing somebody’s final moments before death, and it’s clear there’s some motivation here that goes deeper than just catching up with old friends.

As more is revealed about Eden and Will’s past, Eden’s sudden interest in reconnecting with her old pals becomes more and more concerning.

The film toes the line between careful plotting and intentional misdirection. Will is constantly questioning everything around him, and in context, his paranoia makes total sense. As Will continually makes his suspicions known, there always appears to be some sort of logical explanation. Why would the doors be locked? Who are these two strangers in the room? Why are they so against anybody leaving the room?

Juxtaposed against Will’s traumatic flashbacks, all the seemingly ominous elements masterfully toy with the viewer. Will’s own sanity is in the driving force here, and the flashback structure provides us just the right amount of context to keep us both informed and also slightly in the dark about he and Eden’s family history. Is Will just breaking down mentally, or is this party really as sinister as it appears to him, and how far is Eden willing to go to delude (or is it heal?) herself?

The film is extremely rich thematically and has a lot to say about the process of dealing with grief. Without giving too much away, the two leads’ approach to dealing with their baggage differ wildly, and it’s that tension that keeps the narrative so insanely gripping throughout. Watching Will grapple with (what he thinks is) the reality of the situation is more than enough to keep you on the edge of your seat.

The Invitation does not fall victim to genre limitations — it features complex performances and the narrative focuses more on character detail than blood & guts, which renders its horrors far more psychological than physical. The most memorable moments actually stem from the heated confrontations between Will and Eden’s new husband, and both Logan Marshall-Green and Michiel Huisman are terrific throughout. The rest of the cast puts in great work as well, including comedian/podcaster/TV host Jay Larson in his feature film debut and the instantly recognizable character actor John Carroll Lynch.

You probably think you know where The Invitation is going, and while you may be halfway there, the film’s final moments are still unexpectedly shocking and hard to shake. The film is deeper than it appears on surface-level, so simply knowing where it’s going doesn’t really matter. Genre fans will certainly want to RSVP, as will anybody who’s ever equated moving to Los Angeles with joining some delusional cult.

The Invitation will be released in theaters on April 8th, 2016.