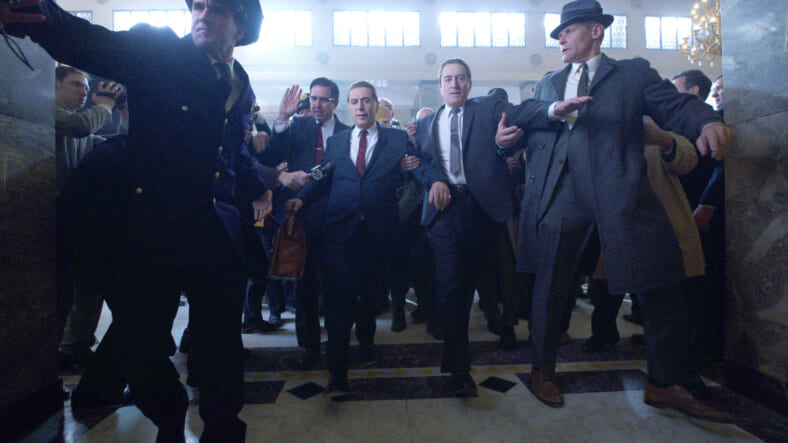 Good thing The Irishman is coming to Netflix, because its epically long running time might tempt viewers to stretch out on the couch.

Director Martin Scorsese’s highly-anticipated mob movie–which stars Robert De Niro, Al Pacino and Joe Pesci–will clock in at a staggering 210 minutes. The 3-and-a-half hour running time was leaked after someone noticed it was added to the website of the New York Film Festival, where the film will make it’s world premiere in September.

The final running time is IN! Martin Scorsese’s THE IRISHMAN is a leisurely 210 MINUTES long 👀 https://t.co/lqEjw376Ih

Uproxx helpfully broke down the run time in comparison to some of Scorsese’s other movies:

On the doc front, it’s 15 minutes shorter than 1995’s A Personal Journey Through American Movies and two minutes longer than both No Direction Home, about Bob Dylan, and George Harrison: Living in the Material World.

For those who need a refresher, here’s Netflix’s official synopsis:

Robert De Niro, Al Pacino and Joe Pesci star in Martin Scorsese’s THE IRISHMAN, an epic saga of organized crime in post-war America told through the eyes of World War II veteran Frank Sheeran, a hustler and hitman who worked alongside some of the most notorious figures of the 20th Century.

Spanning decades, the film chronicles one of the greatest unsolved mysteries in American history, the disappearance of legendary union boss Jimmy Hoffa, and offers a monumental journey through the hidden corridors of organized crime: its inner workings, rivalries and connections to mainstream politics.

The Irishman will open in select theaters beginning Nov. 1 and Netflix on Nov. 27.