“Things have gotten out of hand with our friend.” 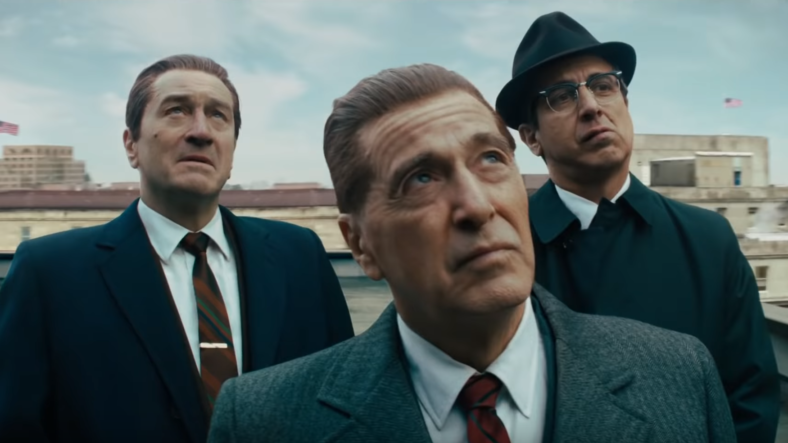 In the new trailer for Martin Scorsese‘s gangster epic, The Irishman, we get an idea for the first time as to just what a sweeping drama this truly is. We also see if De Niro’s–and Al Pacino’s and Joe Pesci’s–digital de-aging really worked or not.

The verdict on the last, at least in the trailer? Eh, it sorta works.

But first, this is a Scorsese movie, and if nothing else, it promises the kind of intense and in-depth storytelling we’ve come to expect from the legendary director. The life of the Irishman in the title, Frank Sheeran (De Niro), was the stuff of history, after all.

In the book on which the movie is based, I Heard You Paint Houses, Sheeran’s life is traced from his first association with mobster Russell Bufalino (Joe Pesci) up to the mysterious disappearance of his one-time employer Jimmy Hoffa (Pacino).

It’s likely Hoffa being referred to when at one point Pesci’s Bufalino says, “Things have gotten out of hand with our friend.” (But hell, it could be John F. Kennedy, too–see below.)

Now in his old age, WWII veteran and former mafia hitman Frank Sheeran reflects on the moments that defined his mob career, especially his role in the 1975 disappearance and murder of Jimmy Hoffa.

It doesn’t seem random that the JFK assassination is prominently featured in the trailer, either–given one of the most persistent conspiracy theories about the 40th president’s murder is that it was a mob hit.

With Martin Scorsese many will trust that they won’t even notice the lead actors’ digitally-aided youthfulness.

There’s no way to know for sure until the movie is out.

The Irishman hits a select number of theaters on November 1 and begins streaming on Netflix November 27, 2019.