‘The Mandalorian’ Dethrones ‘Stranger Things’ As Top-Streaming Show in U.S. 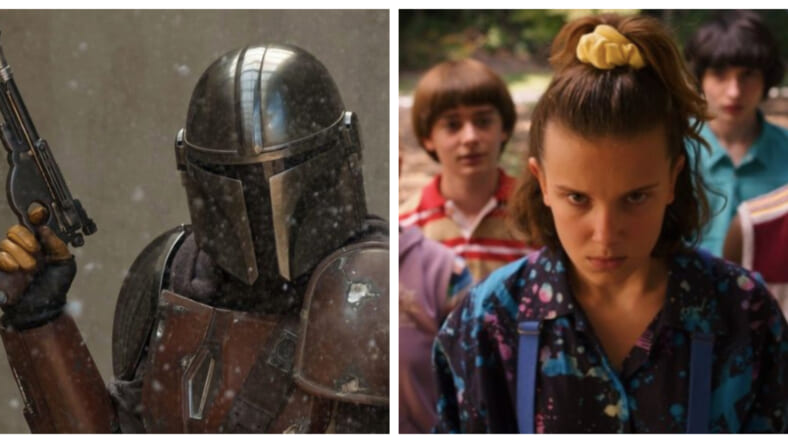 It’s likely to stay there for a while.

Business Insider (BI) cites some analytics for us:

Netflix’s “Stranger Things” enjoyed 21 straight weeks at the top of Parrot Analytics’ weekly list of the most in-demand original streaming shows in the US, but “The Mandalorian” has surpassed it. Parrot Analytics measures “demand expressions,” the company’s standardized TV-demand measurement unit designed to reflect the desire, engagement, and viewership of a series weighted by importance.“The Mandalorian” had over 100 million demand expressions during the week of November 17 to November 23, according to Parrot Analytics, while “Stranger Things” had 81 million.

While the Stranger Things numbers are certainly solid, it’s not even a close race—especially if you consider Disney Plus is brand new.

Business Insider quotes a rep for the Analytics service who cautioned that “while demand is a metric that should not be confused with subscriber numbers, this is a strong indication that the ‘Star Wars’ series is driving a lot of sign-ups to the recently-debuted Disney Plus service.”

As BI notes, The Mandalorian is a critical success as well—it currently has an excellent 89% critics’ rating on Rotten Tomatoes and is scoring 95% fresh with viewers.

Let’s admit it—part of that has something to do with a big reveal in a recent episode of Mandalorian, when the title character is shown taking care of an infant obviously related to the legendary Jedi master.

NBC put it concisely in a headline: “‘Baby Yoda’ owns the internet.” The character immediately became the focus of a million different memes and we wouldn’t be shocked if it ends up a merchandising juggernaut.

With the fourth season of Stranger Things likely over a year away, it seems a sure bet that The Mandalorian will remain top dog for a while, especially considering that Star Wars: The Rise of Skywalker hits theaters on December 20.

For a while, it’s just going to be a Star Wars-crazy world.