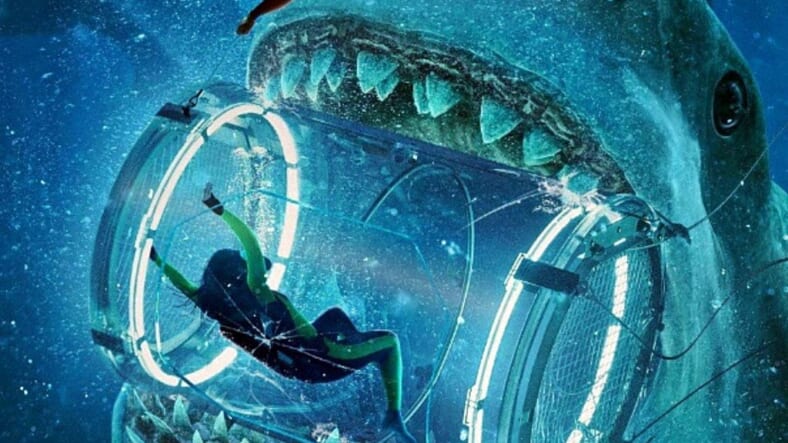 Next week, Jason Statham‘s prehistoric-shark-battling film is hitting theaters, and while it likely won’t be an Oscar contender, it looks like the perfect action flick for the dog days of August.

Here’s the trailer, just so you’re all caught up.

Lucky fans got to see an early screening of this underwater opus, and ScreenGeek collected some of the best reactions… and they’re just what we were hoping for.

Oh I’m allowed to tweet about The Meg now too.

I LOVED The Meg. It is exactly the bonkers, snowball of excess, wild, dumb, fun movie you are hoping for. It knows exactly what it is but is just serious enough to keep you invested. pic.twitter.com/N7ZYqwQ71z

Jason Statham vs giant prehistoric shark = THE big summer movie you’ve been waiting for. A heart-pounding thrill-ride with stunning visual effects & a big sense of humour. A lot of fun. Had a whale of a time, sorry! #TheMeg @MegMovie #JasonStatham 🦈😱 pic.twitter.com/qmyrRdeaeD

#TheMeg *is* like JURASSIC PARK and JAWS on steroids. A total, mega-fun crowd-pleasing riot with bite that’s a gargantuan amount of mega-entertaining, mega-intense thrills. An absolute must see with a crowd. @Themeg2018 @MegMovie @wbpictures pic.twitter.com/pLEy2JJHMJ

Obligatory “I’ve seen #TheMeg and it’s crazy stupid blockbuster fun!!” tweet (sans some intentional soapy melodramatics). Statham vs. Supershark battle does *not* disappoint. Every summer season should have at least one underwater ”Asylum But Better” flick like THE MEG. pic.twitter.com/8ayuTmlRJX

That’s enough for us to get our ticket (though probably not from MoviePass.)

As for the plot (really?) here’s the official synopsis:

In the film, a deep-sea submersible—part of an international undersea observation program—has been attacked by a massive creature, previously thought to be extinct, and now lies disabled at the bottom of the deepest trench in the Pacific…with its crew trapped inside.

With time running out, expert deep sea rescue diver Jonas Taylor (Jason Statham) is recruited by a visionary Chinese oceanographer (Winston Chao), against the wishes of his daughter Suyin (Li Bingbing), to save the crew—and the ocean itself—from this unstoppable threat: a pre-historic 75-foot-long shark known as the Megalodon.

What no one could have imagined is that, years before, Taylor had encountered this same terrifying creature. Now, teamed with Suyin, he must confront his fears and risk his own life to save everyone trapped below…bringing him face to face once more with the greatest and largest predator of all time.

Get your tix when The Meg open (very) wide on August 10.