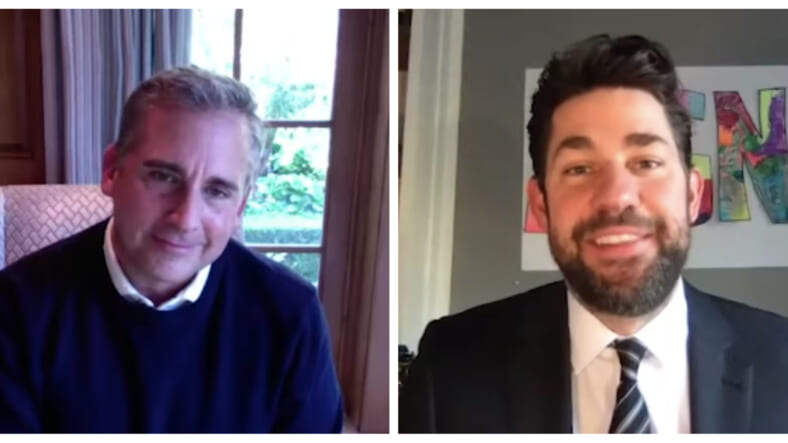 Brace yourself for the most genuinely wholesome and positive thing you’re likely to watch today: John Krasinski, a.k.a. Jim Halpert from The Office and star of Amazon’s series based on Tom Clancy novels, Jack Ryan, hosting his own homemade talk show, Some Good News.

It is, quite literally, just about 15-plus minutes of Krasinski in his home office, with an SGN sign made by his daughters behind him, talking about good news as sent to him by his social media followers. Then about six minutes in he welcomes his first guest, Steve “Michael Scott” Carell.

Carell and Krasinski are obviously good friends and their conversation about their time on The Office is as heartwarming as it is hilarious.

Krasinski also highlights numerous expressions of gratitude from communities around the world for the healthcare workers who are on the frontline in the fight against the novel coronavirus pandemic.

He closes with a guest shot from his “biggest hero,” Coco, a young girl whose entire neighborhood put on a “socially-distanced” but truly moving celebration of her final round of chemotherapy. The video of her neighbors is moving enough, but the girl’s shout-out to the people who took care of her during treatment might send some viewers in search of some tissues.

Krasinski framed the video as a one-off with potential for repeating if people liked it, and it looks like he’ll be doing more—Some Good News has already racked up well over 7 million views in two days.

During a trying time when an astonishing number of people are trapped at home as the world tries to slow the advance of a deadly new pathogen, it’s easy to find a lot of corny attempts at positivity—this doesn’t feel like that.

Fans of The Office looking for more lighthearted and funny content from former cast members can also check out The Office Ladies podcast hosted by Angela Kinsey (Angela Martin on the show) and Jenna Fischer (Pam Halpert). It’s one hour of Kinsey and Fischer talking about a single episode of the show each week, with plenty of background stories and guest spots from the iconic TV comedy’s former creative team and other cast members.

Everyone needs an occasional break from the news, and these distractions are totally worth the time.