As “Black Adam” The Rock is “ruthless” and “unstoppable.” 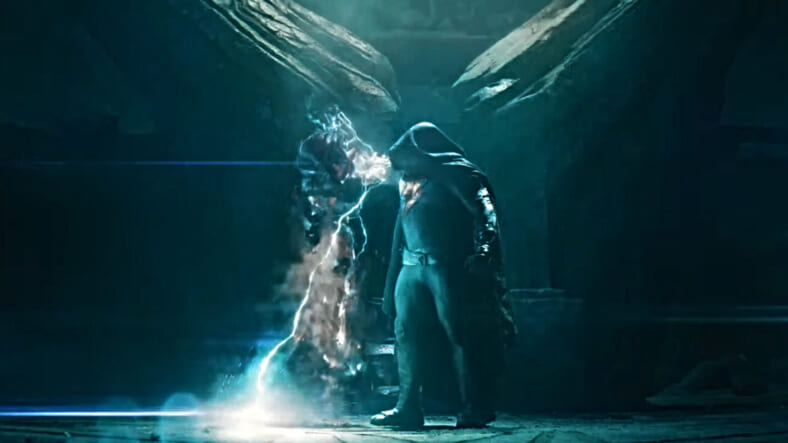 Black Adam is not a friend to humanity. The title character in Dwayne “The Rock” Johnson’s long-awaited DC antihero saga, Black Adam, certainly doesn’t seem like one in our first good look at the character, which Johnson introduced Saturday as part of DC’s virtual FanDome convention.

Watch the action star’s introduction and the teaser below.

Johnson has been open about all the work it took to get his pet project made, posting workout videos illustrating just how hard he trained to embody the character—originally conceived as a nemesis to Shazam.

While the character was first created in 1945, Black Adam has been through a few reboots over the history of DC comics. IGN gives more details on the version played by The Rock:

It all starts with a man named Teth Adam who lived 5000 years ago. He was a slave in the fictional country of Kahndaq, a bustling nation brimming with wealth and magic. Thanks to the wizard Shazam choosing him as a worthy champion, he was able to rise up to destroy his oppressors, free his people, and name himself the new ruler of Kahndaq.

Taking the name Black Adam and wielding the powers of Shazam (including the wisdom of Solomon, the strength of Hercules, the stamina of Atlas, the power of Zeus, the courage of Achilles, and the speed of Mercury), he was loved by those he liberated but was also feared for how he used violence and death to dole out justice to those he deemed to be wrongdoers. This dichotomy is the very core of Black Adam’s character and why he’s seen as an anti-hero.

The violence prompted the wizard Shazam—the same wizard who would much later grant such powers to a kid named Billy Batson, giving us Zachary Levi’s movie Shazam! in 2019—to banish Black Adam. When we see him in the trailer above, Johnson’s Adam emerges from 5,000-year confinement. He must then confront the Justice Society of America (JSA), also previewed to some degree in the video.

In the new movie, the JSA is made up of Hawkman (Aldis Hodge), Atom Smasher (Noah Centineo), Cyclone (Quintessa Swindell), and Doctor Fate (Pierce Brosnan).

Black Adam was originally set for a December 2021 release in theaters but it’s now slated to premiere on July 29, 2022.