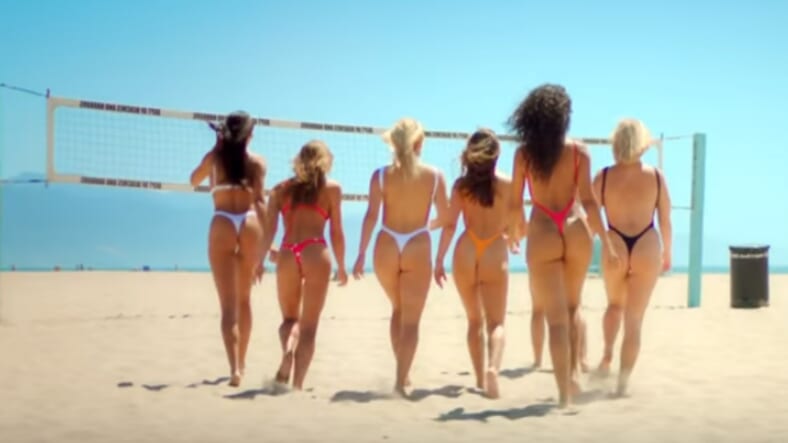 Unless you live under a rock, you probably know the “Thong Song.” You know, the timeless 1999 classic from Sisqo about ladies with dat ass wearing thongs?

Well, it’s with great pleasure that I announce that, 18 years after the original ode to g-strings was released, the Thong Song is back, my dudes. Sisqo, along with JCY, decided to bless the world with a 2017-ified remake of his iconic hit, just in time for the summer.

The new Thong Song has everything you could ever want in a 2017 summer anthem. For starters, girls in thongs? Check.

Even more girls in thongs? You got it, my friend.

While it’s totally understandable that the remake shed its 90s vibe and got a very 2017 makeover, it’s immediately clear that Sisqo forgot one very important thing in 1999 – models that have “dumps like a truck” and “thighs like what-what-what.”

Side note: “Dumps like a truck” does not mean big poops. Sisqo himself confirmed that it references a woman with a badonkadonk so big, it’s like a dump truck backing up.

The comments on Buzzfeed‘s post on the Thong Song remake is just full of people complaining about the lack of booty in the new video.

One salty person commented: “…None of those women had dumps like a truck and I feel cheated out of a good time,” to which someone else replied: “For real though. Those thongs were pretty empty.”

Hmm…what do you think? I personally think the models could have filled out the thongs a little more, but that’s just me.

Still, I extend my deepest condolences to all who’ve been disappointed by the lack of thicc girls in the new video.

Anyway, in an interview with Buzzfeed, Sisqo explained why he decided to make an updated version of the classic ode to booty:

“I’ve been asked so many times over the years to make a new version of ‘Thong Song’ and I have declined every time until I heard the new version that JCY did. I thought it was dope and figured maybe it was time to put some new rims on the Bugatti.”

Well, no matter if you’re a fan of the original, or if you prefer the dubsteppy, less-bootylicious 2017 version, the Thong Song will forever be one of the most iconic novelty hits of all time.