Check out what we were up to in December of ’06. Don’t worry, we’ll leave out our middle school class picture. 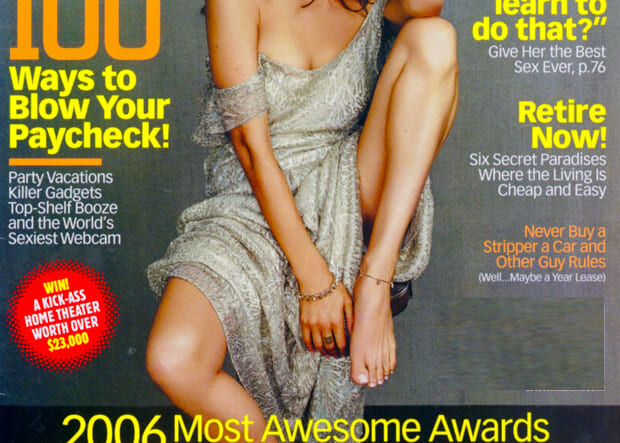 Every week, we send someone stumbling into the dark Maxim archives to see what we were up to way back when. This week we’re going back to December of 2006, when Angelina Jolie only had one child, “Neckerchiefs” were a thing, and our gift guide was full of antiquated goodies.Cover Girl: Angelina JolieWhere You’ve Seen Her: In 1998 this full-lipped babe snagged Hollywood’s attention with her depiction of lesbian supermodel Gia Carangi in the TV movie Gia.Her acting talent was undeniable – and was further confirmed by her Oscar-winning role in 1999’s Girl, Interrupted, but it was Angelina‘s edgy weirdness that helped her gain notoriety. Between hooking up with her brother on the red carpet and wearing a vial of then-husband Billy Bob Thornton’s blood around her neck – she quickly became a favorite among the paparazzo. But by the time she graced our pages in ’06 and took on the title of “Woman of the Year,” she had become more known for her philanthropic causes than her crazy sex life. Sort of.Where She Is Now: Since donning our cover Angelina tackled roles in films like Beowulf, Changeling, and Salt, and made her directorial debut in 2011 with the film In the Land of Blood and Honey. After taking a four year hiatus, Angelina is heading back to the big screen with the 2014 Disney film Maleficent, and continues to be one of the sexiest women alive.Oh, and she has approximately 15 children with long-time partner Brad Pitt.Featuring:The Good, The Bad, And The Ugly
It’s no secret that shitty reality TV has taken over the networks, but if Girls Gone Grabblin’ was still on, we’d have a lot less to complain about. A bunch of hot girls trying to catch monstrous catfish? Finally, a show we can appreciate! But other fads like neckerchiefs (what the actual fuck?) and $300,000 cell phones leave us thankful to be living in 2013… Until we’re surfing the channels and remember that Here Comes Honey Boo Boo is a real TV show, then we go back to wanting to kill ourselves.Maxim‘s 2006 Holiday Gift Guide
Aside from having to entertain your family and listen to shitty holiday albums on loop, this is the best time of the year. Specifically for one reason: gifts (we’re greedy bastards, in case you weren’t aware). This year’sMaxim Holiday Gift Guide is full of stuff we actually want for ourselves, but taking a look back at our 2006 selves, we can’t say the same. Of course there’s a few gems on there – we’d still take that Baywatch gift set despite it being nine seasons too short – but others, like clothes Cliff Huxtable would sport, are no longer our fancy.  More on Maxim.com:Throwback Thursday: August 2000 – Tyra Banks & Izabella MikoMaxim’s 2013 Holiday Gift Guide