Check out what we were up to in March of ’02. Don’t worry, we’ll leave out our middle school class picture. 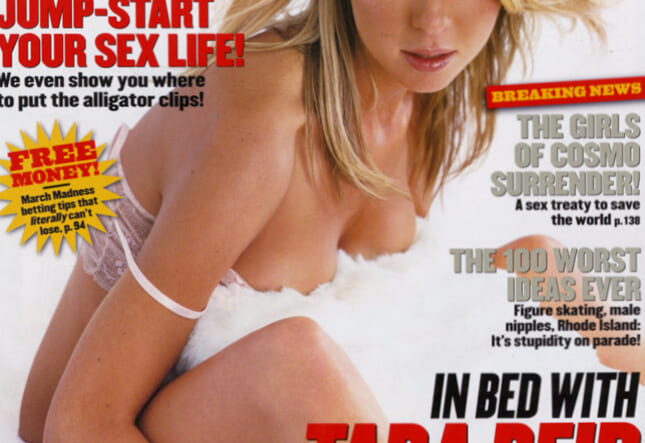 Every week, we send someone stumbling into the dark Maxim archives to see what we were up to way back when. This week we’re going back to when Tara Reid was a college dream, Alanis Morissette was the quintessential example of Chick Rock, and we wore lobsters on our pants. Cover Girl: Tara ReidWhere You’ve Seen Her: We’ve had a thing for Tara Reid since she propositioned Jeff Bridges with a $1,000 blow job in the 1998 classic The Big Lebowski. And why wouldn’t we? With her blonde hair, girl-next-door demeanor, and killer body, it was practically a no-brainer. When she posed for our cover, Tara was fresh off the American Pie bandwagon and promoting her film Van Wilder: Party Liaison. After watching them dozens of times, we learned that college girls will always be hot and that we should really make our way back there at some point.Where She Is Now: After the unexpected success of last year’s TV movie Sharknado, the bombshell has a few projects up her sleeve (and no, we’re not referring to a Sharknado sequel, though that would be fucking awesome). Keep your eyes peeled for Tara in two new films, The Hungover Games and Wild Things in Europe 3D, both debuting this year.Featuring:Top Spin
Remember that time your girlfriend went through her chick rock phase? It was around the same time she turned vegan and started hating you. Well, you can thank Alanis Morissette for those few miserable months. When her debut album Jagged Little Pill hit record stores in ’95, we learned the hard way not to come within a six mile radius of a girl playing “You Oughta Know.” But when we covered her 2002 album Under Rug Swept, our fear had lessened. These days, it’s totally gone thanks to increasingly convincing evidence that her break-up anthem was actually an ode to Uncle Joey on Full House; if she continues to go for guys who play with puppets and the Olsen twins, we’re totally safe.Leg Work
In 2002 we fell victim to the “yuppie/douchebag/prepster” trend; nearly everything we owned was patterned with fluorescent polo players and, apparently, lobsters. Of all things to have plastered on your groin, lobsters? Anyways, we’ve come a long way since then – anything remotely resembling the above is right where it belongs: Inside the deep recesses of our parents’ basement.