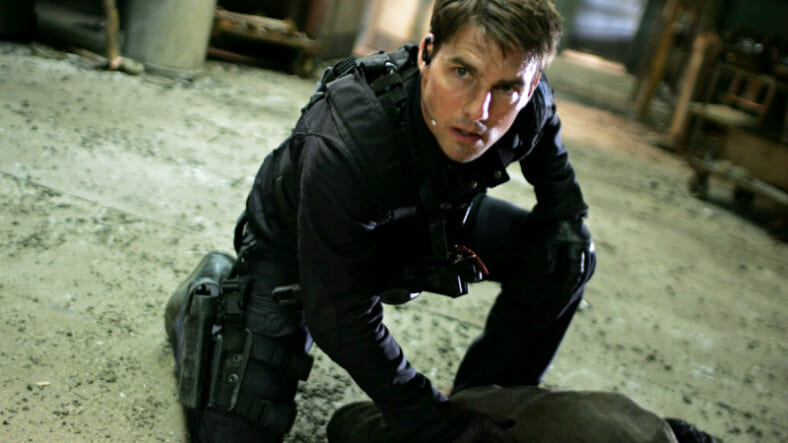 When it comes to coronavirus pandemic-related rules on a movie set, Tom Cruise has no chill.

This isn’t surprising, as the 58-year-old actor is famously intense on-screen and off. A recording leaked from the set of Mission Impossible 7 demonstrates that Cruise’s intensity isn’t limited to his incredible physical commitment to every role he takes on. He’s also the boss on set, and man, does this boss get really pissed off sometimes.

“You can tell it [your apologies] to the people who are losing their fucking homes because our industry is shut down."https://t.co/h52i180cvQ

Unlike other celebrity meltdowns captured on audio or video, this seems less like an egomaniacal tirade from a spoiled superstar and more like genuine outrage from someone who is deeply frustrated with the situation before him. At least at first.

Per UK tabloid The Sun, here’s a partial transcript:

We want the gold standard. They’re back there in Hollywood making movies right now because of us! Because they believe in us and what we’re doing! I’m on the phone with every fucking studio at night, insurance companies, producers, and they’re looking at us and using us to make their movies. We are creating thousands of jobs you motherfuckers.I don’t ever want to see it again, ever! And if you don’t do it you’re fired, if I see you do it again you’re fucking gone. And if anyone in this crew does it – that’s it, and you too and you too. And you, don’t you ever fucking do it again. That’s it! No apologies. You can tell it to the people that are losing their fing homes because our industry is shut down. It’s not going to put food on their table or pay for their college education.That’s what I sleep with every night. The future of this fucking industry! So I’m sorry I am beyond your apologies. I have told you and now I want it and if you don’t do it you’re out. We are not shutting this fucking movie down! Is it understood? If I see it again you’re fucking gone — and you are — so you’re going to cost him his job, if I see it on the set you’re gone and you’re gone.That’s it. Am I clear?

Cruise wasn’t done there, of course. He hammered home his point about responsibility then said, “And I care about you guys, but if you’re not going to help me you’re gone.”

Read on the page it sounds like the anger of a man who just wants everyone to follow the rules and be safe, and there was plenty of sympathy for Cruise online.

THIS. IS. GODDAMN. BEAUTIFUL.

I wish MORE people in charge would react like this to people who violate protocols or not wearing masks. If only more people saw the bigger picture that Tom is highlighting here.

Good on @TomCruise . Thanks for setting an example on this, sir! https://t.co/YH9ICI2CCT

Tom Cruise ain't wrong. Now he just needs to come back to America and yell at every single anti-masker. https://t.co/TLQSnbXZ0R

Interesting gap in the reaction to Tom Cruise.
People in my TL under 40: He's a monster! No human being would ever talk to colleagues that way?!
People 40-60: sounds just like my old boss.

There did seem to be an age breakdown between those who thought Cruise’s behavior was unconscionable and abusive and those who just sagely accepted that bosses just act that way sometimes, with millennials and younger gravely offended and Gen Xers and older folks shrugging at the familiar sound of a pissed-off boss who has had it with everyone.

In their post about the rant, Brobible, however, made an important point:

Because this is Tom Cruise, though, not everything is as it seems: according to reports, the COVID protocols that the crew members broke were simply standing too close to each other while looking at a monitor. Not breaking curfew, not taking off their masks: standing too close together.

Cruise did reportedly pay over a half-million dollars of his own money to house MI:7 cast and crew in a decommissioned old cruise ship which is a generous, baller kind of move, but it seems like a handful of people a little too close together must have been the straw that broke the camel’s back for him—one little offense too far.

One thing seems sure: It’s not really going to affect Cruise’s career. Unlike Christian Bale’s infamous rant on the set of Terminator: Salvation, which did seem to dampen the Oscar-winner’s prospects for a time, the feeling that Cruise’s diatribe was the result of righteous anger might—in the long run—just work for him.

The crew on the receiving end of his rage in the recording, however, probably won’t.

Mission Impossible 7 is slated to premiere on November 19, 2021. Go see it for the sake of future film crews having to deal with a pissed-off Tom Cruise.