Blink 182’s Tom DeLonge Revealed ‘The Truth’ About Aliens, And You’ve Got To See This 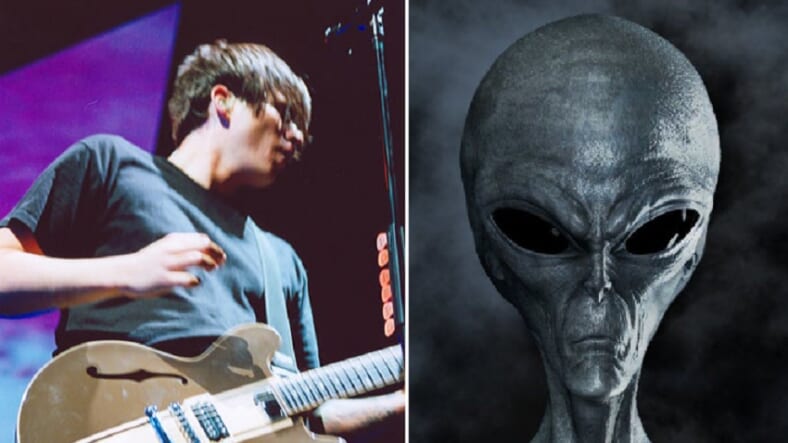 Join me LIVE as we reveal the experts from within the top-secret shadows of aerospace, science and the DoD to unvei… https://t.co/2V6LAYDfyz

Tom DeLonge‘s avid interest in UFOs and the possibility of extraterrestrial life in general has never been a secret. He essentially stepped away from his career with pop punk hitmakers Blink-182 in part to devote himself to it.

Now he’s put his curiosity into high gear, announcing in a Twitter livestream on Wednesday the formation of an institution devoted to learning about “the outer edges of science” and understanding unusual “phenomena.”

The event is in the tweet embedded above if you want to watch the whole thing. If you don’t: DeLonge has formed To The Stars Academy of Arts and Science.

Assisting DeLonge in his presentation were some names with credentials that might make you look twice. They included former Deputy Assistant Sec. of Defense for Intelligence Chris Mellon, Dr. Hal Puthoff, a former director of scientific research for the DOD and the CIA, and Jim Semivan—previously with the CIA.

Thank you all for waiting for an announcement that is literally 2 years in the making. I have assembled a team of insiders that I believe can possibly change the world. All are current consultants to the US Gov on National Security Matters, and some literally left days ago from the Department if Defense to join me in this initiative. Fmr. High Ranking Government Officials and Senior Intelligence Officers from CIA, DOD, and also a Chief Engineer (Director of Advanced Programs) from Lockheed Martin’s the Skunk Works have come together aiming to BUILD A REVOLUTIONARY TECHNOLOGY that can change life as we know it (we will be showing a concept of the exotic craft tomorrow), research the unknown and finally tell the “story of the millennia” through Feature Films. NO ONE GOVERNMENT, INDIVIDUAL OR INSTITUTION should own what can truthfully help the world. We all can own it together. To The Stars Academy of Arts and Science is allowing a group of those who are interested to join us on day one. Www.ToTheStarsAcademy.Com (story link in profile) LIVE EVENT TOMORROW at 9am PT at Www.ToTheStarsAcademy.Com — https://dpo.tothestarsacademy.com/#offering-circular

DeLonge’s site for the Academy explains in further detail what it’s all about. Sorta.

The public interest in the outer edges of science and the understanding of phenomena has always been suffocated by mainstream ideology and bureaucratic constraint.We believe there are transformative discoveries within our reach that will revolutionize the human experience, but they can only be accomplished through the unrestricted support of breakthrough research, discovery and innovation. To The Stars Academy of Arts & Science has mobilized a team of the most experienced, connected and passionately curious minds from the US intelligence community, including the CIA and Department of Defense, that have been operating under the shadows of top-secrecy for decades.

The team members all share a common thread of frustration and determination to disrupt the status quo, wanting to use their expertise and credibility to bring transformative science and engineering out of the shadows and collaborate with global citizens to apply that knowledge in a way that benefits humanity.Without the restrictions of government priorities.

That last sentence is key. As a “Public Benefit Corporation,” To The Stars Academy will raise money through crowdfunding from investors.

Tom DeLonge’s mission isn’t quite as eccentric as it seems. The inclusion of fiction projects seems to make it clear he’s keenly aware of keeping things entertaining, as well—a pretty clever insight into how to draw the curious into the esoteric science part of the mission.

He also claims the overall effort is altruistic, writing in his mission statement that he has “sought answers” since childhood, and that was what led him to music. But now he believes that “unlocking these mysteries” could well be a “key to a better future for my kids.”

Social media response has been mixed.

Godspeed, we say. Or E.T. away or something. Let’s hope he’s having fun.