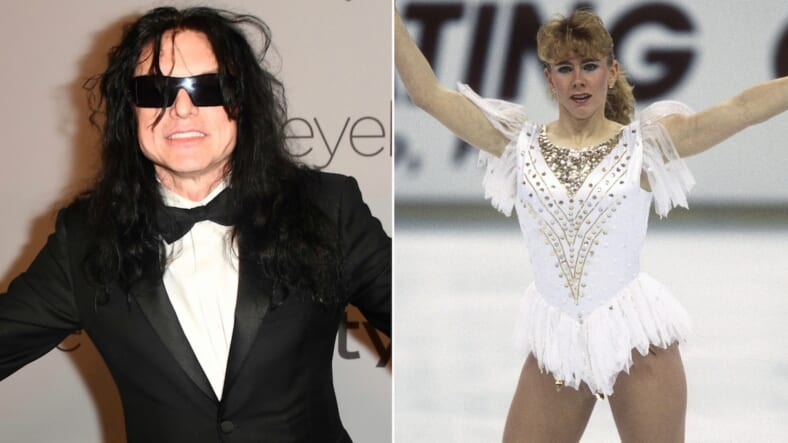 The 2018 Golden Globe Awards gave us many memorable moments, from Seth Meyers’s scathing takedown of Hollywood predators to hints (or jokes?) of an Oprah 2020 presidential run.

The after-party also gave us the strangest but most epic D-list celebrity coupling of all time: disgraced former Olympic skater Tonya Harding and Tommy Wiseau, the star and creator of “the worst movie ever made,” The Room.

Both are enjoying surprise resurgences this awards season.

Tonya Harding’s life story was the subject of a sympathetic biopic I, Tonya, for which Allison Janney won a Best Supporting Actress for her portrayal of Tonya’s abusive mother LaVona.

The troubled making of The Room was depicted in The Disaster Artist, for which James Franco won Best Actor, Motion Picture, Comedy or Musical for his spot-on work as Wiseau, inscrutable accent, crazy hair and all.

Sebastian Stan, who played Harding’s diabolical ex husband Jeff Gillooly in I, Tonya, shared the image of Tonya and Tommy together on his Instagram Story. He captioned the photo, “Happy 2018!”

Wiseau also gave viewers viral gold when he attempted to take the mic from Franco during his acceptance speech, which Franco quickly blocked. “Wow, wow, wow!” Franco said as he pushed Wiseau away.

Wiseau revealed in a post-awards ceremony interview with The Los Angeles Times what he would have said had Franco shared the mic: “If a lot of people loved each other, the world would be a better place to live.”

It was one of the most memorable and enjoyable awards ceremonies in recent years, and it set a high bar for the upcoming 2018 Oscars.

Here, all the winners of the 75th annual Golden Globe Awards:

Best Original Song: “This Is Me” — The Greatest Showman

Best Actor, Drama: Sterling K. Brown, This Is Us

Best Actor, Comedy or Musical: Aziz Ansari, Master of None