The Best Video Games Coming Out this Fall

We preview the biggest and baddest games for Xbox, Playstation, Nintendo and PC. 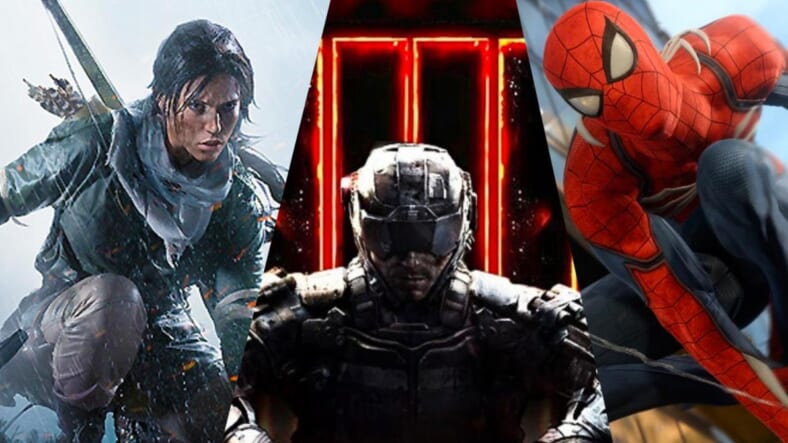 The end of the summer gaming drought is upon us. Madden 19 has already begun the steady march of incoming blockbusters this fall and, after Labor Day, you can expect something new almost every week to make sure your Playstation 4, Xbox One, Nintendo Switch and PCs never feel ignored.

Here, the 13 best games that you’ll be playing for the rest of the year.

Bungie’s superb gunplay remains the core draw for Destiny 2’s entry into its second year. The upcoming Forsaken expansion hopes to bring a huge breath of fresh air and a lot of happy gamers into D2 the way The Taken King DLC reinvigorated the gameplay and community in the original Destiny game. We’ve had hands on time with Forsaken’s new Gambit game mode and were wonderstruck at how it blended both the best parts of Destiny’s PvP and PvE elements. Mix in a few new weapons and armor that are actually lustworthy and now would be a good time to get your guardian prepped for the next Destiny installment.

The Playstation-exclusive outing for the webhead already has game of the year potential written all over it. Spidey’s getting a HUGE version of Manhattan with plenty of Avenger flair to set the scene. Our hands-on time with Spider-Man at E3 confirmed that this is the most capable version of Spider-Man we’ve ever seen in a game, able to clear out entire rooftops of baddies while feeling properly “super” doing it. It’s reminiscent of the excellence we’d found in the handling of Batman in the Arkham series and we can’t wait to take on the Sinister Six, who’ll all be in attendance.

Shadow of the Tomb Raider

The long list of Tomb Raider games over the series’ two decade run has led us to this point. Shadow of the Tomb Raider is a down and dirty, gritty and violent outing for one of the most fundamental characters in all of video games. Lara’s latest adventure is sure to show off huge swaths of Earth’s most spectacular and dangerous locales while challenging you with puzzles, stealth and combat. Square Enix’s recent handling of the series has reimagined Lara perfectly and the latest game carrying the Tomb Raider name is sure to give us more of what we want.

The hottest cars in the world are here for your choosing to rip up the English countryside. Or maybe you prefer to take on quarter miles against friends on the back roads of Scotland instead. Forza Horizon 4’s moving to Great Britain but it’s not missing a step in terms of the realistic looks and arcade racing that has become its signature. New dynamic seasons and tighter online integration with the Forza community are helping to continue the Forza Horizon tradition while adding a few new tricks to its routine.

It’s been many years since the iconic blue robot got a new game and, from our time playing it, Mega Man 11 has benefit from the long hiatus. Mega Man is back in his full retro glory but make no mistake that this is a modern game, one that implements all kinds of new techniques and abilities for our hero. Timing and technical skill are still paramount as you traverse the themed worlds and build your arsenal but we can’t remember a Mega Man game looking or feeling this good and that’s even after recent revisits thanks to the Mega Man Legacy Collections.

No period in history is off limits to the Assassins. The Crusades, the American Revolution, Victorian London, Renaissance Italy. Now it’s time for the series to take a crack at ancient Greece. The retooled AC formula that’s more akin to last year’s Egyptian outing than previous entries in the series promises heavier RPG elements and a vast new landscape for you to explore as you tackle history and mythology alike with new challenges and unique weapons.

Always providing the most over-the-top entries into the COD series, Black Ops 4 is here to shake up the Call of Duty world after a gray and gritty revisit of WWII. Black Ops 4 drags the blockbuster shooter back into the future and promises revamped competitive online gameplay as well as a new story that slants more towards a summer tentpole movie than a historic period piece. Recent beta gameplay has been met with praise and criticisms from fans, not unexpected from Call of Duty and its rabid community but, with so much of their fanbase seeing online deathmatches as the make or break of a COD game, we think Black Ops 4 is going to have some serious staying power well after its fall launch.

In the other camp of FPS fanatics are all the players who prefer Battlefield to Call of Duty. Fans of the former are likely excited by the WWII setting, hoping that their beloved shooter choice proves that Battlefield does it better. There’s definitely a reason BFV comes out a week after Call of Duty, daring gamers to make the choice between the two. With an iffy campaign made up of war stories and a renewed emphasis on online battles, we’ll be waiting to see which series reigns supreme on the war front this year.

When Rockstar takes the lid off of a new game, you have to pay attention. The dying days of the wild west set the stage for another adventure that’s full of gunslinging, cinematic set pieces and the mayhem that we expect of Rockstar’s games. With the success of GTA Online continuing several years after the launch of GTAV, we expect RDR2 to have both an epic campaign to tell its story and have high hopes for ganging up with friends to rob stage coaches, buy saloons and enjoy western debauchery like only Rockstar provides.

Hitman’s recent episodic outing, taking the bald-headed assassin to take out marks in one exotic location after another has ushered a new generation of gamers into the i-mean-to-be-stealth-but-killed-everyone gameplay that’s made Hitman a fun and challenging series from its inception. Hitman 2 is sure to deliver a wider scope, more tactical choices and an even shinier dome for Agent 47 than we’ve ever seen before. Bonus: If you missed last year’s Hitman episodes, you can also take solace knowing that you can catch up, since they’ll be included with the new game.

Nintendo is hoping to merge its longtime Pokemon fans with the newly acquired ones from Pokemon Go by merging the two styles of game into a single experience on Nintendo Switch. The gameplay is as straightforward as a playing Pokemon Go as a character controlled on the screen instead of actually walking around IRL but some serious innovation in the cross-platform department as well as the addicting mantra of “Gotta Catch ‘Em All” is sure to be a winner yet again for all the trainers out there.

Get ready to create some chaos in a vast jungle world. Just Cause’s bread and butter of late have been terrific third-person action that dares you to see just how creative you can be in destroying every bit of the world around you. JC4 has some new goodies to help you meet that end and some unique places to try out your destructive ideas. There’s sure to be some story and missions here too but, really, we’re all amped to float a gas tanker into a tornado, aren’t we?

This year’s must-own Nintendo Switch game is Super Smash Bros. Ultimate. Rounding up the largest collection of new and previous Smash characters ever, tweaking the formula to make the fighting more accessible to newcomers and more precise for veterans and giving almost every gamer out there a reason to pay attention, Super Smash Bros. Ultimate is a new high water mark for fighting games everywhere and will undoubtedly become the center of the Esports world on its launch. In the very least, it’ll give lots of gamers a reason to fire up their Switch, take a subscription to Nintendo’s upcoming premium online service and start kicking each others’ asses like we’re back in our dorm rooms. Or maybe we’ll wait for the N64 Mini and do that in Goldeneye instead.