Feeling like a virgin requires feeding on one’s younger colleagues. Most recently, she took to Drake at Coachella. 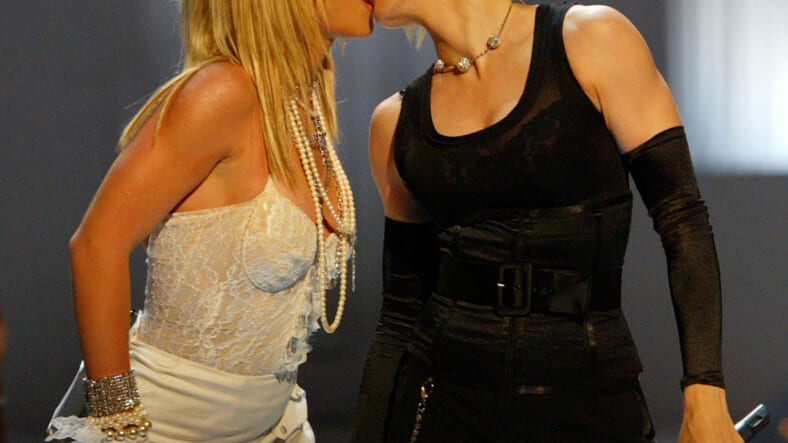 The New Yorker’s television critic, Emily Nussbaum, tweeted it best: Old divas shouldn’t zing young ones for being sexual. Instead, suck their souls out with performative lesbianism. Though that recommendation was inspired by Madonna’s infamous 2003 VMA tryst with Britney Spears, we’re happy to report that in the intervening decade, Madonna has only redoubled her efforts to ritualistically tongue-bathe the music industry’s ingénues.

Who is the latest recipient of one of Our Unrepentant Lady of The Leotard’s soul-siphoning kisses? None other than Drake, the doe-eyed Prince of Canadian Kvetch, who yesterday at Coachella unwillingly provided Madge several quarts of his vitality and whose kiss marked an important widening of Madonna’s sexual-spiritual purview. (Performative Sexuality: now for men!) Those who contest Drizzy’s diva status need only glance at his Rider Requirements.

We have reached a critical mass. What before was conjecture now is fact: like a bustiered, purse-lipped Dementor, Madonna is nourished by the souls of the young. While some might find that distressing, it is a pragmatic choice from a woman famous for them:  a Goop-sourced diet, punishing work-out schedule and kilowatts of Kabbalah vibrations will only go so far. Maintaining vice-like thighs, Tarsier-bright eyes and the acrobatic energy and ravenous libido of a Tisch freshman requires biannual sips at the fountain of Young Pop Soul. In fond appreciation of the woman putting “near-sex” in “near-sexagenarian,” here are the five of Madonna’s most famous feedings.

1. In the early years of her career, Britney Spears was yoked with a Sexy Baby persona that proved too tempting to the be-gloved provocatrice: Madonna pounced and feasted on Britney’s raw bloom of youth.

3. Madonna’s gloved hand on Drake’s neck is all about the mechanics of sucking a soul: one must straighten the trachea so that the life-force may emerge unbruised.

4. As she wiped a drop of young Miley’s anima from the corner of her glossy lips, Madonna thought: I wielded my sexuality for fun and profit a decade before you were born, kiddo!

5. In a moment of desperation, Madonna suckled on the quintessence of a mere backup dancer, which friends noted sustained her for less than a month.

Photos by Photo by Kevin Kane/WireImage