Take a Tour of the Millennium Falcon With Donald Glover, aka the New Lando Calrissian 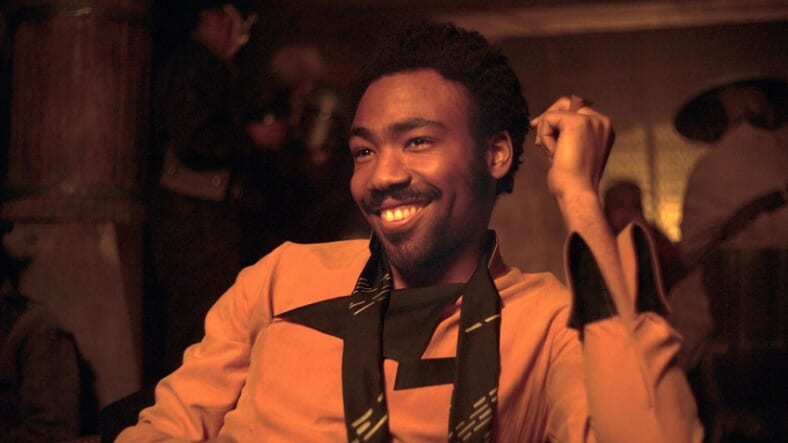 Donald Glover, who plays a young Lando Calrissian in the upcoming Solo: A Star Wars Story, is a great tour guide. Then again, he’s got one hell of a crib to show off: the interior of Lando’s spiffed-up, bachelor pad version of the Millennium Falcon.

It’s probably one of the most familiar spaceship interiors in science fiction—at least among relatively small spacecraft. But let’s face it, the Falcon we’re accustomed to is grubby, an apparent victim of Han Solo’s crappy housekeeping. There are probably layers of Wookiee dander everywhere.

Lando’s Falcon has some cool amenities. Brightly-lit buttons, a bar, leather seats, and the glorious cape room. It honestly seems like Lando would be a great host, until he robbed you blind in a game of chance or gave you over to Darth Vader.

Along with the Wookiee dander, another thing missing from this Falcon is Han Solo’s leather vest and his blaster.

That’s nowhere to be seen because it’s apparently up for auction right here on Earth. You can begin bidding on June 23, but before you get excited, know this: you won’t be able to actually blast anything with it.

There’s an impressively subtle idea behind this luxe version of the legendary ship. Screenwriter Jon Kasdan told ComicBook.com that Han’s version of the ship had a “shabby coolness” compared to Lando’s sleek-looking home because the Falcon “reflects its owner very clearly in its shape and aesthetic and his needs.”

Looks like Lando Calrissian’s needs involve impressing whatever female guests he brings on board—and maybe back to the captain’s quarters.

We’ll get a closer look inside this Millennium Falcon when Solo: A Star Wars Story premieres May 25.