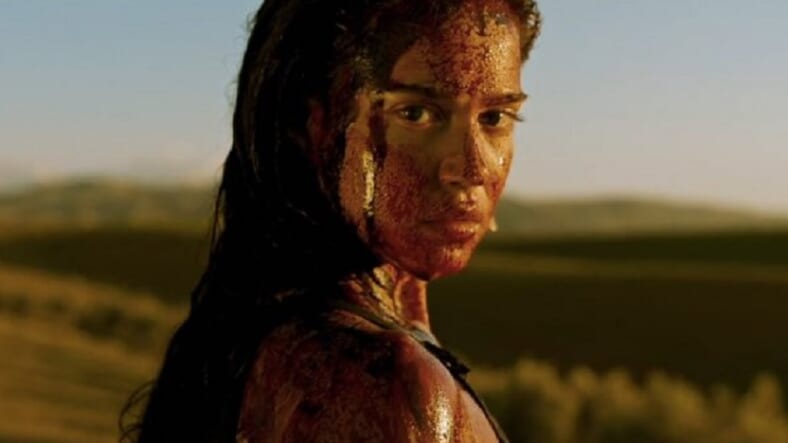 Sometimes a movie trailer comes out of nowhere and blows you away. You’ve never heard of the production and the stars are new to you—and you have to see it.

As is clear from her Instagram, Lutz—last seen in Rings—looks great on camera whether she’s splattered with bad guy blood or not. One thing she clearly does in this movie is draw some blood, and the trailer makes it obvious as to why… she has good reason for wanting payback.

Jen (fearlessly embodied by Matilda Lutz…) is enjoying a romantic getaway with her wealthy boyfriend which is suddenly disrupted when his sleazy friends arrive for an unannounced hunting trip. Tension mounts in the house until the situation abruptly––and viciously––intensifies, culminating in a shocking act that leaves Jen left for dead. Unfortunately for her assailants, Jen survives and reemerges with a relentless, wrathful intent: revenge.

A hot, lonely desert setting, a slight, young woman in a terribly vulnerable position who comes back as an avenging angel?

We’ve damn sure got to see how this works out.

It’s an even bet it works out badly for the guys in this trailer, and great for us. Revenge premieres in theaters on May 11, 2018.