This is creepy as hell. 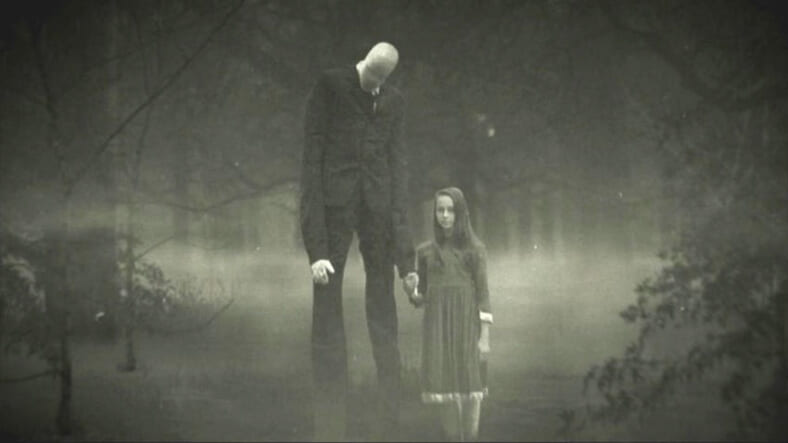 Anyone who has been using the internet for a while might find it hard to believe that anything lasting comes out of online forums other than time-honored tradition of trolling noobs. Turns out the Something Awful forums produced a monster called Slender Man in 2009, and it has developed a life of its own.

Slender Man’s place in the nightmares of internet users may be sealed by the new movie coming from Sony titled (naturally) Slender Man.

The general myth made up around Slender Man—first created by a Something Awful user named Eric Knudsen—is that he appeared in a variety of photos stalking children.

Other SA users picked up on Knudsen’s first photoshopped image and added their own, as well as creepy captions like “We didn’t want to go, we didn’t want to kill them, but its persistent silence and outstretched arms horrified and comforted us at the same time…
— 1983, photographer unknown, presumed dead.”

It’s unclear from this trailer as to what the movie’s story is. The IMDB synopsis simply says “Slender Man tells the story of a tall, thin horrifying figure with unnaturally long arms and a featureless face, who is reputed to be responsible for the haunting and disappearance of countless children and teens.”

We do know that the trailer is full of blood-curdling imagery. There are some horror cliches like the apparently crazed woman writing “HIM” on glass, but there are moments that also give the impression the filmmakers truly understood just how chilling the myth of the Slender Man has become.

The creature did figure, after all, in the attempted murder of a young girl by two friends who believed he was real.

Viewers will find out just where filmmakers have taken this especially eerie myth when Slender Man premieres on May 18, 2018.